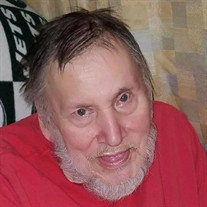 UTICA – John M. (Frenier) Horner, 84, found his way to the other side, on Tuesday, December 29, 2020, where he was reunited behind the rock with the love of his life, Joyce Parker Horner. John was born on December 12, 1936, in Fort Pierre, South Dakota, the son of the late William John and Mary (Noble) Frenier. He attended New York Mills schools. John was a dispatcher for White Star Taxi prior to retiring. John was a loving father, grandfather and great-grandfather. He loved fishing with his boys, grandchildren and great-grandchildren. John had a bond like no other, with his son Jon and daughter / caretaker, Kim. He was an avid coin collector and enjoyed riding his motorcycles. John is survived by his children, Jon (Tracy) Horner, Utica, Kim (Rick) Kessler, Utica, Ashley Pfluke, Utica, Troy (Lynn) Grenicko, Remsen and Laura Horner, Utica; sister, Carol Newman, Frankfort; brothers, Charles Horner, Clinton and Richard Horner, Rome; several grandchildren, great-grandchildren, great-great-grandchildren, nieces and nephews. He was predeceased by sons, Kevin and Quinton Horner and a sister, Linda Gould. Family and friends will be invited to a Celebration of Life to be held at a later date. John will be laid to rest following services.

The family of John M. Horner created this Life Tributes page to make it easy to share your memories.

Send flowers to the Horner family.