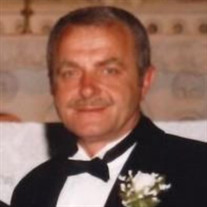 UTICA – John Christopher Borowiec, age 75, passed away peacefully on October 24, 2020, at the Abraham House, Rome. John was born on January 8, 1945, in Poland, the son of Stanley and Maria (Olejarczyk) Borowiec. At the age of 17, he came to the United States and later became a citizen. On November 27, 1965, John married Patricia Ellen Kelley, a beloved union of 54 years. For over 30 years, John was employed at Partlow Corp., New Hartford, as the head of maintenance. He was also a talented welder and tool and dye maker. John then worked at the Fountainhead Group until his retirement. John was known by many for his intelligent mind! He was a master builder and could fix anything. He was a reliable, caring, and giving man. John strived to make sure that family traditions were kept. Although John did many things, his greatest accomplishment was his family. We are at peace knowing he is reunited with those he loved and missed so much. John is survived by his beloved wife, Patricia; children, Paul (Denise) Borowiec, Lisa (Fred) DiStefano, Laura (Joseph) DePalma, Christopher (Holly) Borowiec; grandchildren, Brandon, Alyssa, Stephon, Shane, Nicole, Angelina, Nathan, Francesca, and Jacob; great-grandchildren, Avary, Eleanor, and Evalyn; his best friend and brother, Richard Borowiec who has always been by his side; in-laws, Halina, Cindy, Mary, Fred (Mary Ellen) and many nieces, nephews and cousins. John also leaves behind special friends, Rich and Jake Jakubowski as well as his Coci Donna Olejarczyk. John was predeceased by his parents, in-laws, Frederick and Jeanette Kelley; brother, Walter; sister-in-law, Lorraine, and grandson, Andrew. Relatives and friends are invited and may call on Tuesday from 4 to 6 p.m. at Kowalczyk Funeral Home, 470 French Rd., Utica. Funeral services will be Wednesday at 10 a.m. at Holy Trinity Catholic Church, where a Mass of Christian Burial will be celebrated. Private interment will be in Holy Trinity Cemetery, Yorkville. In lieu of flowers, please consider remembrances in John’s name to Abraham House at www.theabrahamhouse.org. Envelopes will be available at the funeral home. John’s family would like to thank the staff at St. Elizabeth Medical Center, the Abraham House in Rome, and Hospice & Palliative Care, Inc. for their compassionate care.

The family of John Christopher Borowiec created this Life Tributes page to make it easy to share your memories.

Send flowers to the Borowiec family.