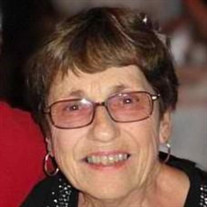 WHITESBORO – Joan M. Messineo, 82, passed away on Saturday, December 12, 2020, at home. Joan was born on September 6, 1938, in Amsterdam, NY, the daughter of Frank and Marina (Mary Puglisi) Boccio. She was a graduate of Wilber H. Lynch High School, Amsterdam. On August 18, 1963, Joan married Michael A. Messineo in St. Michael’s Church, Amsterdam, a blessed union of 54 prior to his passing on December 20, 2017. Joan was a keypunch operator for Mohawk Carpet Mills (Mohasco) prior to retiring. She was a communicant of the Church of Our Lady of Lourdes. Surviving are her children, Michele (James) Malagese, Whitesboro, Renee (Joe) DiMeo, Washington State, Marc (Alayna) Messineo, Long Island and Michael (Rachele) Messineo, Florida; six cherished grandchildren, Justin (Stephanie), Krystina, Gianna, Antonia, Luke, and Alivia; three great-grandchildren, Shayne, Austin, and Nova; brothers and sisters-in-law, Francis and Jude Boccio, Michael and Lita Boccio and Sandra Boccio; brothers-in-law and sisters-in-law, Anthony and Agnes Messineo and Patrick (Patricia) Messineo; several nieces and nephews. Relatives and friends are invited to attend a Mass of Christian Burial to be celebrated at 12 noon on Monday, January 4, 2021, at the Church of Our Lady of Lourdes. The family will receive guests following Mass. Interment will be in Mt. Olivet Cemetery, Whitesboro. Those wishing to attend Mass virtually may do so using the following link: https://www.youtube.com/c/JoeSalernoOLOL In lieu of flowers, remembrances in Joan’s name may be made to the Church of Our Lady of Lourdes. Envelopes will be available at the Mass. Arrangements are under the direction of McGrath, Myslinski, Karboski & Nunn Funeral Directors, 470 French Rd., Utica.

The family of Joan M. Messineo created this Life Tributes page to make it easy to share your memories.

Send flowers to the Messineo family.