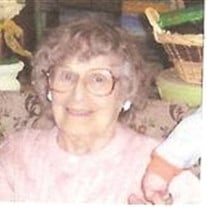 Jessie Kielbasinski Utica/South Bay Jessie Kielbasinski, 94, formerly of Utica and South Bay, Oneida Lake died on Tuesday, April 21, 2009 at the Presbyterian Home for C.N.Y. She was born in Utica on October 1, 1914 the daughter of Karol and Marija Lapinska Swiecki and was educated in local schools. She was a member of Holy Trinity Church and also St. Stanislaus Church in Utica where she married Edward Kielbasinski on June 20, 1939, a lasting union of 67 years until his death on November 19, 2005. Jessie was a former member of the St. Stanislaus Church Choir, the Church Bingo group, the Women's Club, Christian Women and the Walter Skiba P.L.A.V. Post Ladies Auxiliary. She often joined the women of the church in making golabki and pierogi for the church dinners and fund raisers and was very proud of her apple pies. Jessie loved to eat apples and always chose the largest and sweetest out of the bushel to eat for her dessert because of their size. Her children and grandchildren dubbed them "Grandma Jessie Apples", a label which is smilingly repeated even today. As a young woman, Jessie worked as a seamstress for the Oneita Knitting Mills and later retired from the Utica Cutlery Co. after 30 years of service. She was particularly proud that she was chosen to be one of the few women across the U.S. to work on gun sights for guns sent to the soldiers in the War in Vietnam. She often said that each bayonet and gun sight she completed was sent with the prayer that it was absolutely perfect so that the soldier using it would return safely to his mother. After retirement, Jessie joined the Utica Senior Citizens and spent many happy times traveling with them and her dear friend, Roxie Lambert, throughout the Eastern States. Jessie was a woman of simple tastes, a woman with a jolly, fun loving personality and an infectious smile. She always greeted people with "Hello Dolly, How was your day?" She was a loving mother who passed on her love of birds and nature to her children and grandchildren, often laughingly saying "Ain't nature Wonderful". She was delighted when her son and grandson caught and fried her some fresh fish. She had a mean sweet tooth and loved black cherry ice cream. She is survived by her daughter, Nancy Brodey and son Thomas and his wife Mary Kielbasinski all of Canastota; a granddaughter Patricia Kielbasinski of Canastota; a grandson Thomas and his wife Julie Kielbasinski of Cazenovia and granddaughter Trenna and her husband John Kelley of Cazenovia; two great granddaughters, Emily and Kathryn Kielbasinski and great grandson Alexzander (Zander) Kelley; a brother and sister-in-law Edward and Gloria Swiecki and a sister Ann Zdanowicz all of New Hartford and a sister-in-law Stella Kielbasinski of Whitesboro. Also included are several nieces and nephews. She was pre-deceased by her husband Edward, a brother Stanley Swiecki and son-in-law Sherman Brodey and her dearest friend Roxie Lambert. Relatives and friends are invited to attend a Mass of Christian Burial which will be celebrated on Friday at 10:30am at Holy Trinity Church. Those that wish may call one hour prior to the funeral Mass at the Kowalczyk Funeral Home 1156 Lincoln Avenue, Utica. The women of the Skiba Post will gather at 9:30am for services. Burial will take place in St. Stanislaus Cemetery. The family of Jessie would like to express their sincere appreciation to the nurses and staff of the Elm Unit of the Presbyterian Home for C.N.Y. for the excellent care and kindness she received throughout her stay. Memorial contributions in her name may be made to the Holy Trinity Memorial Fund 1206 Lincoln Avenue, Utica, NY 13502. Light a Candle at: www.kowalczykfuneralhomes.com

Jessie Kielbasinski Utica/South Bay Jessie Kielbasinski, 94, formerly of Utica and South Bay, Oneida Lake died on Tuesday, April 21, 2009 at the Presbyterian Home for C.N.Y. She was born in Utica on October 1, 1914 the daughter of Karol and... View Obituary & Service Information

The family of Jessie Kielbasinski created this Life Tributes page to make it easy to share your memories.

Send flowers to the Kielbasinski family.