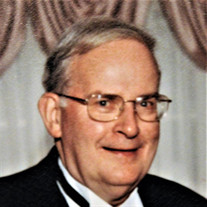 NEW HARTFORD - James F. Kirkpatrick, 92, passed away on January 17, 2022, at Katherine Lutheran Residential Health Care & Rehabilitation with his family by his side. James (Jim) was born on March 17, 1929, in Herkimer, NY, the son of Edward and Mary (Fullem) Kirkpatrick. He attended St. Francis Elementary School and graduated from Herkimer High School in 1946. He continued his education at Syracuse University where he received a Bachelor’s Degree in English and then at New York State College for Teachers in Albany where he earned a Master’s Degree in English Education. Jim began his teaching career in the Scotia/ Glenville School District in 1951, and in 1963 accepted a position teaching high school English at New Hartford Central School, retiring in 1991. Jim was also a Veteran of the U.S. Army serving from 1952-1954. On September 4, 1965, he married Ann Ridley at St. Patrick’s Church in Oneida, NY, sharing 56 wonderful years together. During his teaching years in New Hartford, he served as President of the New Hartford Teachers’ Association and was their retirement delegate to NYSUT. He also conducted retirement workshops for local teachers. In retirement, Jim kept active by serving on the New Hartford School Board, as a Trustee of the New Hartford Public Library and a volunteer at the American Red Cross. He also served Our Lady of Lourdes Church as Head Usher for many years and as a member of the Pastoral Council. Jim was an avid reader, film/theater buff and a music lover who also enjoyed a good political discussion. He was a loving husband, father and grandfather who was the ultimate provider and supporter, always encouraging everyone in their endeavors. Jim is survived by his loving wife, Ann, his children and their spouses, Kathryn (Todd) Remis, Ellen (Michael) Soron and Laurie (Steven) Carty. He also leaves 10 grandchildren, Michael (Elizabeth) Corelli, Samuel and Izabella Fatata, Elizabeth Remis, Ryan, Andrew and Emma Soron and Will, Nora and Jane Carty. He also leaves several special nieces and nephews. Besides his parents, Jim was predeceased by his beloved daughter, Julie Fatata, his brother and wife, Jack and Margaret Kirkpatrick, his sister, Joan Kirkpatrick and his brother-in-law, Robert Ridley. Arrangements have been entrusted to McGrath, Myslinski, Karboski & Nunn Funeral Directors, 470 French Rd., Utica. There are no public calling hours. Family and friends are invited to attend a Mass of Christian Burial at Mary, Mother of our Savior Parish, Our Lady of Lourdes Campus, 2222 Genesee St., Utica on Saturday, January 29, 2022, at 11:00am. The family will receive visitors following Mass. All COVID mandates will be followed. Spring Interment will be at Calvary Cemetery in Herkimer, NY. The family would like to extend a special thank you to the Gordon Unit staff at Katherine Lutheran Residential Health Care & Rehabilitation, who provided Jim and the family with care and compassion during his stay. In lieu of flowers, remembrance may be made to Hope House (www.hopehouseutica.org) or the New Hartford Public Library (www.newhartfordpubliclibrary.org). Envelopes will be available at the Church.

NEW HARTFORD - James F. Kirkpatrick, 92, passed away on January 17, 2022, at Katherine Lutheran Residential Health Care & Rehabilitation with his family by his side. James (Jim) was born on March 17, 1929, in Herkimer, NY, the son of Edward... View Obituary & Service Information

The family of James F. Kirkpatrick created this Life Tributes page to make it easy to share your memories.

Send flowers to the Kirkpatrick family.