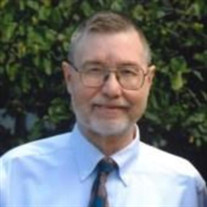 James R. Kesler, “Jim,” age 76, passed into the presence of the Lord on Friday, January 14, 2022, at St. Luke’s Hospital with his loving wife Anne by his side. Jim was born January 31, 1945, in Shipshewana, IN, the first son of Benjamin and Miriam Carpenter Kesler. He attended Goshen College and graduated from Purdue University. On August 18, 1968, he married Anne Ellen Johnson. They moved from the Midwest to upstate NY for his work as an electrical engineer at GE and brought at least three good things to life: his children that he raised to appreciate the landscape and seasons of the Northeast. Jim accepted Christ as his Lord and Savior at age 9 and was a faithful member of the Hope Alliance Church for 52 years, where he served in many servant roles as a leader, helper, and encourager. His priority was always to attend church faithfully on Sundays with his family. His legacy is his perseverance and hope in Christ and love for family and the church. Jim was known for his infectious laugh, which let friends know that he was in the same movie theater. He loved to tell long stories, was an expressive children’s book read-aloud entertainer, and was the best autoharp player East of the Mississippi. Always an entrepreneur, Jim built Bible quizzing jump seats, made games and puzzles for his children, and crafted imaginative storefronts out of boxes. He enjoyed camping with his family in their popup at Delta Lake Family Camp and Bowman Lake State Park. He was also the best Easter egg hider for the grandchildren. He played Upwords with his wife every day. Jim is survived by his dedicated wife Anne, daughter Heidi (Aaron) Goerner, sons Paul (Jana) and Douglas (Christina), and the baker’s dozen grandchildren he was so proud of: Lydia (Nate) Stowe, Ben, Daniel, Grace (Javon) Pratt, Abe, Maggie, Katie, Karissa, Erik, Kassandra, Mia, Aria, and Dillon. He also leaves his sister Connie Runnels, brothers Kenneth, Steven, Stanley, Richard and Dennis Kesler and their families. The family is thankful for the care of Dr. Garg, Dr. Sikder, Dr. Pavlock and many other caregivers, but especially for Anne’s patient and constant companionship and advocacy every day. A memorial service will be held at 11 AM on Monday, January 17, 2022, at Hope Alliance Church, 4291 Middle Settlement Road, New Hartford. A private burial service for family will be held at Forest Hill Cemetery, Utica. Jim would be delighted if you would consider a remembrance in his name to your favorite overseas mission organization. m

The family of James "Jim" R. Kesler created this Life Tributes page to make it easy to share your memories.

Send flowers to the Kesler family.