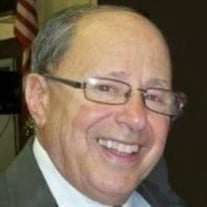 UTICA – James D. Daly, 85, passed away on Wednesday, April 13, 2022, at Faxton St. Luke’s Healthcare. Jim was born on August 10, 1936, in Whitesboro, the son of George and Katherine (Coogan) Daly. He was a graduate of Whitesboro High School. Jim was an electrician and worked for the F.X. Matt Brewing Company in Utica. On February 7, 1959, he married Carol S. Schmitt at Zion Lutheran Church, a blessed union of 55 years until her passing on December 2, 2014. Jim was a loving husband, father, grandfather, and great-grandfather. He enjoyed gardening, golfing, and camping with close friends and was an avid bowler. Jim also loved to brew and drink beer. He was our go-to “MacGyver” as he could fix almost anything. Jim was also an honorary member of the Utica Maennerchor and the men’s chorus. Jim is survived by daughter and son-in-law, Jacqueline and Douglas Gross, Clifton Park; sons and daughters-in-law, James D. II and Jill Daly, Latham, and Jon C. and Lenore Daly, Chadwicks. He leaves grandchildren, Katelyn (Matt) Davison, Carlene (John) O’Connor, Brittany (David) Blankenship, and Desiree Johnson and a great-grandson, Tevin Daly Johnson. Jim is also survived by his brother and sister-in-law Kenneth and Sybil Daly, sister-in-law Mary Daly, brother-in-law Carl Schmitt, and sister-in-law Judy Schmitt. Along with many nieces and nephews. Jim was predeceased by a granddaughter, Tyshanna Johnson, and his brothers Terrance and Denis Daly. Relatives and friends are invited and may call Tuesday, April 19, from 4 to 6 pm at McGrath, Myslinski, Karboski & Nunn Funeral Directors, 470 French Rd., Utica. Funeral services will be Wednesday, April 20, at Zion Lutheran Church, 630 French Rd. at 11 am. Interment will be at Mt. Olivet Cemetery, Whitesboro. In lieu of flowers, remembrances in Jim’s name may be made to the Presbyterian Home Foundation to benefit the Parkinson’s Unit (https://www.communitywellnesspartners.org/presbyterian/donate) or the Utica Maennerchor Building Fund. Envelopes will be available at the funeral home.

The family of James "Jim" D. Daly created this Life Tributes page to make it easy to share your memories.

Send flowers to the Daly family.