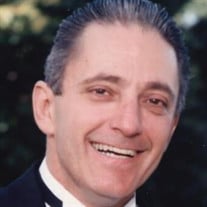 WHITESBORO – Dr. Herbert A. Sipp, 80, was reunited with his beloved wife, Carol, on December 25, 2020. Herb was born on June 3, 1940, in Brooklyn, NY, the son of Herbert H. and Ann (Thristino) Sipp. He earned a Doctor of Chiropractic Degree from Columbia Institute of Chiropractic. In 1963, Herb married Carol Korcak in North Carolina. They enjoyed a blessed union of 56 years prior to her passing on December 5, 2019. Together they owned and operated Utica Chiropractic Center for 49 years. Herb was the best (and the only) Chiropractic Doctor in Utica in 1977. Herb especially loved when his family, Suzanne, Lisa, and Chuck joined him and Carol in practice. He touched many lives and was honored to do so in his 49 years of practice. He also served as an independent medical examiner. While teaching health at UFA from 1966-68, he was known as a world-renowned arm wrestler by his students. Herb was involved in many organizations including the NYS Chiropractic Association, American Chiropractic Association, Utica Bottle Club, Earth Metal Detecting Club, Titanic Historical Society giving many Titanic presentations throughout Upstate NYand the Oneida County Historical Association. He was also a board member of the Utica Salvation Army Cascade Division and Utica College, and a charter member of North Utica Rotary where he was instrumental in the Rotary International Desk Project in Leon, Mexico, which he considered one of his crowning achievements. Herb was honored with the Paul Harris Fellow when the North Utica Rotary bestowed its most prestigious award to him. Herb loved antique cars and was a member of the Model A and Model T Clubs. He enjoyed not only the restoration of his antique cars but giving people rides, showing them at car shows and participating in many local parades. Surviving are three children, Dr. Suzanne (Neil) Hoyt, Manlius, Gregory (Karen) Sipp, Utica, and Dr. Lisa (Dr. Chuck) Vallee, Oneida; six grandchildren, Alyssa, Amanda, McKenzie, Morgan, Devin (3rd Generation Chiropractor), and Emily; sisters, Glory Henry, Mary Sipp-Green and Anna (Art) Bray; in-laws, Dr. Ronald and Faye Korcak, Patricia Korcak and several nieces and nephews. In keeping with Herb’s wishes, there will be no funeral services. Remembrances in Herb’s name may be made to the Utica Salvation Army, 14 Clinton Pl, Utica, NY 13501. Herb’s family would like to thank his doctors, nurses and staff as well as the congregation at Rome 7th Day Adventist Church for all the care and compassion shown him throughout his illness. Arrangements are under the direction of McGrath, Myslinski, Karboski & Nunn Funeral Directors, 470 French Rd., Utica. Messages of sympathy at www.mmknfd.com

The family of Dr. Herbert A. Sipp created this Life Tributes page to make it easy to share your memories.

WHITESBORO – Dr. Herbert A. Sipp, 80, was reunited with his beloved...

Send flowers to the Sipp family.