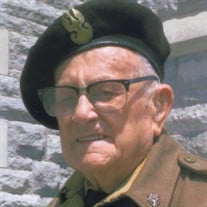 Not sure what to send?

Henry M. Jaworski, 97, passed away on Monday, May 16, 2022, in the comfort of his home, with his family by his side. Born on July 2, 1924, in Łomża, Poland, Henry was the son of the late Mieczyslaw and Henryka Brodowska Jaworski. On October 4, 1952, he married Bertha Skiba in St. Stanislaus Church. They shared a blessed union of over 59 years prior to her passing on August 27, 2012. Henry was in the 8th English Army, 3rd Karpassion Division Single Corps, 3rd Division Infantry in Siberia and served also in Russia, Italy and England from 1942-1948. He was Honored with the Cross of Valor (Poland) for his actions in the war. He was employed as a Mental Hygiene Therapy Aide at Mohawk Valley Psychiatric Center for 28 years, until his retirement in 1986. Henry was a member of Holy Trinity Church were he also was an usher, a 4th Degree Knight of Knights of Columbus, William E. Burke Council #189, White Eagle Association, the Polish Community Club, Kopernik Memorial Association, Polish Combatants of World War II SPK 13, Polish Legion of American Veterans Walter Skiba Post #20, and the Fraternal Order of Eagles #140. Henry is survived by son and daughter-in-law, James and Kristine Jaworski, Santee, CA. Sons Walter Jaworski, Clinton, and Paul Jaworski, Rome. Daughter-in-law Deborah Hailston Jaworski, Deerfield, and Gina Jaworski, New York Mills. Grandchildren, Stephanie and Grace Jaworski. Sister and brother-in-law, Barbara and Stanley Walerski, New York Mills; sister-in-law, Marianne Jaworski, Utica; brother-in-law, Edmond Urbanik, formerly of New York Mills now of Beacon. He is also survived by many nieces and nephews. Henry was predeceased by two sons, Eric Jaworski and baby Theodore Jaworski; siblings, Joanna Warburton, Janusz Jaworski, Lila Jaworski and Marysia Jaworski. In keeping with Henry’s wishes, there will be no public visitation. A Memorial Mass will be celebrated on Tuesday, July 12, 2022 at 11 AM at Holy Trinity Catholic Church. The Jaworski family also invites you to a Celebration of Life immediately following the Mass, at the Polish Community Club. In lieu of flowers, remembrances in Henry’s name may be made to Holy Trinity Church, 1206 Lincoln Ave., Utica, NY 13502 or the Polish Community Club, 810 Columbia Street, Utica, NY 13502. Arrangements are under the direction of McGrath, Myslinski, Karboski & Nunn Funeral Directors, 470 French Rd., Utica. Messages of sympathy at www.mmknfd.com

The family of Henry M. Jaworski created this Life Tributes page to make it easy to share your memories.