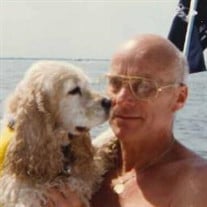 UTICA - Harold Ivor “Ted” Surridge, Jr., 76, passed away on Wednesday, December 12, 2018, in the comfort of his own home. Ivor was born on March 28, 1942, in Utica, the son of the late Sarah Catherine (Evans) and H. Ivor Surridge, Sr. He attended John F. Hughes School and was a graduate of Utica Free Academy and Simmons School of Mortuary Science, Syracuse. Ivor served his community, along with his father, in the funeral service business, which started in 1927 as the Surridge Funeral Home. He believed in helping his families to the fullest during their time of loss and sadness. Ivor was a member of Westminster Presbyterian Church, where he served on many boards and was a good friend of Pastor Bob and his wife, Lettie Umidi. Ivor was a member of the Utica Maennerchor, Utica Kiwanis Club and Utica Lodge No. 47 F & AM Masonic Lodge. He was a former member of the Fort Schuyler Club, past Senior Counselor of the Commercial Travelers Council 244, former member and past chief of Engine Eleven, and formerly belonged to the Ziyara Temple and The Royal Order of Jesters. Ivor also served on the board of the Utica Industrial Development Agency, appointed by former Mayor Louis D. LaPolla, and the American Cancer Society, having set up their Memorial Program, which was one of the first in New York State. He was a charter member of the Cornhill People United, under the leadership of the late Marion Grimes, and the Tri-County Funeral Directors Association. Ivor enjoyed many things in his life including going to coffee with his friends and Friday night outings for happy hour with his good friend James Hamer and others. He also enjoyed action movies with Clint Eastwood and Robert Redford. Ivor had a large collection of football and baseball memorabilia and a number of collectible dogs, along with many miniature cars and trucks. He later collected silver coins and crystal items. He supported the U.S. Humane Society against cruelty to all animals. He had a great passion for the U. S. Marine Corps and was a fan of Ollie North. Ivor enjoyed all kinds of music including Stevie Nicks and Fleetwood Mac, who he saw in concert, in Boston, in 2014, The Eagles, Journey, Phil Collins, The Glenn Miller Band, and many others. He also had a large collection of old time radio tapes. Ivor enjoyed his home on Oneida Street where he lived for over 24 years. He loved to light candles to bring peace to his mind. He raised four special cocker spaniels, Ginger, Ginger II, Killian and Lucky, and a black lab, Ebony, that he loved taking for rides in his pick-up truck. He enjoyed boating and was an avid NY Yankees and Green Bay Packer fan, hosting many Super Bowl parties at Tiny’s Grill. Surviving are his daughter Martha C. Christastie, Fishkill, NY; sister and brother-in-law, Judith Ann and H. Frederick Heuser, San Francisco; granddaughter, Meredith Grace Christastie; son-in-law, Michael Christastie; cousins Tony (Peggy) Evans, Michael (Helen) Evans and Stuart (Joanne) Evans; sister-in-law, Mary Clair, Utica; brothers-in-law, John (Sandra) Clair, New Hartford and Richard Clair, Remsen; niece, Elizabeth and nephews, Stephen and Jonathan Heuser. He also leaves many close friends, especially Patty Hemstrought, who worked with him in his funeral business for many years, and the McGrath family and staff. Ivor was predeceased by his son, Christopher Paul in 2009; sister, Sallie Surridge Jackson in 2005 and brothers-in-law, James Clair and Jerry Jackson; two special aunts, Jane Alice Evans and Mrs. Bernice Surridge Bailey and sister-in-law, Jane Ann Clair. Relatives and friends are invited to attend funeral services on Wednesday, January 9, 2019, at 11 a.m. at Westminster Presbyterian Church, 714 Washington Street, Utica. The family will receive guests following the service. In lieu of flowers, please consider remembrance’s in Ivor’s name to Stevens-Swan Humane Society at www.stevens-swan.org. Envelopes will be available at the service.

The family of H. Ivor Surridge Jr. created this Life Tributes page to make it easy to share your memories.

Send flowers to the Surridge family.