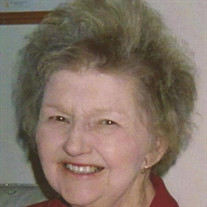 Genevieve C. Piersma, 97, passed away on February 14, 2022, at Crown Park Rehab & Nursing Center, Cortland. Gen was born in New York Mills on March 4, 1924, the daughter of Albert and Genevieve Miga. She attended New York Mills schools, MVCC and Utica College. She was married to Julian Swierczek, a union of almost 40 years. They were married in St. Mary’s Church, New York Mills. Julian passed away in January of 1991. In 1992, Gen married John Piersma of Oriskany who predeceased her. They enjoyed traveling together to Alaska, Hilton Head, and Martha’s Vineyard. Gen was a Library Aide at Adirondack Central District schools in Boonville for many years until her retirement. She was an avid golfer, bridge player, and loved to travel. Gen was an Honorary Member of the B Sharp Musical Club of Utica where she served as Club Librarian for many years and volunteered with concerts and programs. Surviving are her two daughters, Jean (Robert) Carman, McGraw, NY, Sandra Swierczek, Cortland, NY; grandchildren, Sarah (Chris) Edwards, Binghamton, NY, Renee (Anthony) Colgate, UK, Kasha (Chris) Hayes, Silver Spring, MD and Stefanie (Marty) Costello, Arlington, VA; seven great-grandchildren, and special nephew, Steven Hammond, Brookline, MA. She was predeceased by her daughter, Kathy Whorton, and by her five brothers and four sisters. Relatives and friends are invited and may call on Friday from 12-1 p.m. at Kowalczyk Funeral Home, 284 Main Street, New York Mills. Funeral services will follow at 1:30 p.m. at the Church of the Sacred Heart & St. Mary, Our Lady of Czestochowa, where a Mass of Christian Burial will be celebrated. Interment will take place in St. Stanislaus & Casimir Cemetery, Whitesboro, in the spring. Gen’s family would like to offer sincere appreciation to the staff of Walden Place, Cortland, NY for the kindness shown to her during her stay. A special thank you is extended to Sarah Lang and the caring staff. In lieu of flowers, remembrances in Gen’s name may be made to the B Sharp Musical Club Fund of Utica, c/o Community Foundation of Herkimer and Oneida Counties, 2608 Genesee St., Utica, NY 13502. or Dodge Pratt Northam Art & Community Center, 106 Schuyler St, Boonville, NY 13309. Envelopes will be available at the funeral home. To watch Gen’s Mass of Christian Burial follow the link: https://youtu.be/x4RKbR3DYG8

The family of Genevieve C. Piersma created this Life Tributes page to make it easy to share your memories.

Send flowers to the Piersma family.