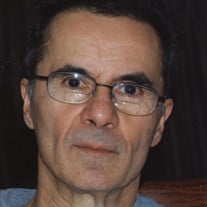 UTICA – Frank A. Barretta, Jr., 70, passed away on May 24, 2021, at the Masonic Care Community. He was born on April 12, 1951, in New Hartford, the son of the late Frank A. and Eleanor (Scotellaro) Barretta. Frank graduated from New Hartford High School and attended MVCC. He served his country in the U. S. Air Force from 1971 to 1991. Frank was a Veteran Employment Specialist with the Department of Labor. Frank loved spending time with his family. He was known for being quite a jokester and for his good sense of humor. He was always making people smile. Frank loved golfing, camping, playing the guitar and was famous for making up songs about people. He also did many outdoor activities and enjoyed sports. Frank was a big Yankee fan. He also had a gift of being a jack of all trades and could fix anything. He is survived by his daughter, Gina Barretta, Utica; son, Garrett (Kristina Gray) Barretta, Rome; brother, Dennis Barretta, New Hartford; grandchildren, Michael, Salvatore, and Giella. He was predeceased by his siblings, Mary and Raymond Barretta; and his step-mother, Elsie Barretta. Relatives and friends are invited and may call on Thursday from 10 to 12 p.m. at McGrath, Myslinski, Karboski & Nunn Funeral Directors, 470 French Rd., Utica. Funeral services will commence immediately following visitation. Interment will be in Holy Trinity Cemetery. Frank’s family extends their gratitude to the staff of the Masonic Care Community for the compassionate care provided to Frank during his stay. Messages of sympathy at www.mmknfd.com

The family of Frank A. Barretta Jr. created this Life Tributes page to make it easy to share your memories.

Send flowers to the Barretta family.