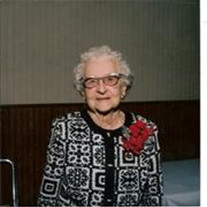 Frances Josephine Kaido of Utica, 99, passed away peacefully on May 6, 2010 at The Pines at Utica with her loving family by her side. Frances was born on Feb. 18, 1911 in Herkimer, the daughter of Sylvester and Mary Chmura. She attended Utica schools and graduated from Utica School of Commerce. On May 5, 1929 Frances was joined in marriage to Felix Kaido at Holy Trinity Church in Utica. They enjoyed a blessed union of more than 50 years before his death on April 26, 1980. She was employed by the Utica Board of Water Supply for 18 years, retiring in 1974. Frances wore many hats. She set a wonderful holiday table complete with traditional Polish and American food for her family and friends. She and her husband enjoyed traveling to Canada, Mexico, Nova Scotia and Haiti. She was an excellent seamstress who never refused to mend the knees of boy's jeans. She also created many costumes for Halloween and school plays. She enjoyed traveling with her daughter Dot and going to casinos with her special friend Vicky Klimek. She also enjoyed playing bingo at the senior centers. Frances was active in many organizations. She was president of the West Utica Democratic Club, a member of Orchard Lake and Sacred Heart Societies, recording secretary of St. Catherine's Society, where she was also named Woman of the Year for the PNA Lodge 1373 in 1992. Surviving are two daughters, Dorothy Holmes of Whitesboro, and Marilyn and Anthony Pettinato Jr. of Utica, with whom she resided for 5 years; one son Robert and Suzanne Kaido of Forestville, CA; one sister Genevieve Newton of New York Mills; grandchildren, Kathleen Bennett and her husband Richard of Utica; R. James Holmes and his wife, Pamela of New Hartford; Timothy Holmes of Whitesboro; Patrick Holmes of Whitesboro; Barbara Pellegrino and her husband Michael of Whitesboro; Sharon Garfinkel and her husband Jay of Huntington Bay; Antoinette Melvin and her husband William of Marietta, Ga.; Anthony Pettinato and his special friend Kimberly Jaquier of Utica; Kristin Pierson of Santa Rosa, CA; Kimberly Kaido-Alvarez of Forestville, CA; and Kyle Kaido of Los Gatos, CA; 13 great-grandchildren, Sean Bennett, Joseph and James Holmes, Kristen and Michael Pellegrino, Anna and William Garfinkel, William Melvin III, Korina Pierson, Nolan, Austin and Evan Alvarez. She also leaves her lifelong friends, Vicky Klimek and Lucy Ryznar. She is also survived by many nieces and nephews. In addition to her husband, she was predeceased by her brother John Chmura; two sisters, Josephine Ford and Wanda Ziajka; and her son-in-law Roland Holmes. Funeral services will be held on Monday at 9:00am at the Kowalczyk Funeral Home 1156 Lincoln Avenue, Utica and at 9:30am at Holy Trinity Church where a Mass of Christian Burial will be celebrated. Relatives and friends may call today from 5 until 8pm. Burial will take place in Holy Trinity Cemetery. The family wishes to thank the nurses and staff on the 4th floor Special Care Unit at St. Elizabeth's Hospital and the Pines of Utica, especially the 4th floor, where she has resided since October 2009. Memorial contributions in her name may be made to the Sisters of the Holy Family of Nazareth 310 North River Road Des Plaines, IL 60016 or to the American Heart Assn., 120 Lomond Court, Utica NY 13502. Envelopes will be available at the funeral home. Light a Candle at: www.kowalczykfuneralhomes.com

Frances Josephine Kaido of Utica, 99, passed away peacefully on May 6, 2010 at The Pines at Utica with her loving family by her side. Frances was born on Feb. 18, 1911 in Herkimer, the daughter of Sylvester and Mary Chmura. She attended... View Obituary & Service Information

The family of Frances J. Kaido created this Life Tributes page to make it easy to share your memories.

Send flowers to the Kaido family.