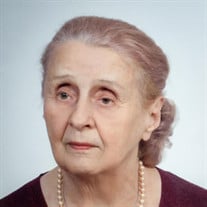 Elizabeth Lucyna Opalka, 90, passed away on January 11, 2022, at her home in Warsaw, Poland. She was born January 12, 1932, in Zamosc, Poland, the daughter of Leon and Leonarda (Bogaczynska) Cios. She grew up in Poland during its occupation in the Second World War and was witness to many atrocities of that period. Elizabeth was married to Tadeusz Opalka on June 11, 1950. They shared a union for 53 years. In Poland, she attended nursing school and completed her medical training as a midwife, responsible for a small health clinic in southern Poland. In 1962, she moved to the United States and settled in Utica. She retired in 1993 after working at General Electric. While in Utica, she was a member of Holy Trinity Church, where she was also a lector. In 2014, Elizabeth moved to Warsaw, Poland to be closer to her son and family. She is survived by her son, Waldemar (Agata) Opalka; five granddaughters, Margaret, Lucy, Suzanne, Eliza, and Helena; daughter-in-law, Stephanie, and other relatives and many friends. She was predeceased by her husband, Tadeusz, and son, Zbigniew Wojciech. Relatives and friends are invited and may call Friday, March 4, 2022, from 5-7 p.m. at Kowalczyk Funeral Home, 470 French Rd., Utica. Her Funeral Mass will be on Saturday, March 5, 2022, at 9:30 a.m. at Holy Trinity Catholic Church, Utica with interment at Holy Trinity Cemetery, next to her husband. In lieu of flowers, please consider a memorial contribution to the Zbigniew Opalka '76 Memorial Scholarship at Utica University: Utica University Office of Advancement, Attention: Kim Suriano, 1600 Burrstone Road, Utica, NY 13502, https://www.utica.edu/advance/donate.cfm, 315-792-3346.

Elizabeth Lucyna Opalka, 90, passed away on January 11, 2022, at her home in Warsaw, Poland. She was born January 12, 1932, in Zamosc, Poland, the daughter of Leon and Leonarda (Bogaczynska) Cios. She grew up in Poland during its occupation... View Obituary & Service Information

The family of Elizabeth L. Opalka created this Life Tributes page to make it easy to share your memories.

Send flowers to the Opalka family.