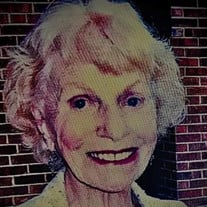 Eleanor H. Williams, 98, passed away on Sunday, June 12, 2022, in the comfort of her home surrounded by her loving family. Born on February 28, 1924, Eleanor was the daughter of Arthur and Mildred (Farrell) Hahn. She was a graduate of Whitesboro High School. On February 14, 1943, Eleanor married Robert A. Williams in Sacred Heart Church. She was a loving wife, mother, grandmother, great-grandmother, and great-great-grandmother. Eleanor’s kind, open, non-judgmental style deeply endeared her to an incredible number of people within and outside the family. She had a quick smile and a wit to match but mostly listened; only offering advice when asked. She was quick to raise a glass and never late for a party. Her door was always open and she always had visitors. Eleanor’s passion was for horses, having raised, trained, and shown them through her 70’s. She was happiest with her family at her bar, at a horse show, or in the barn. Eleanor is survived by her children and their spouses, Linda (Richard) Robinson, David (Gail) Williams and Michael (Margaret) Williams; grandchildren, Lori (Peter) Nicolosi, Michele (Dan) Daly, Christina Whitney (DJ Cornelius), Tara (Kevin) Brabant and Ryan Williams, David Williams, Jr. (Melissa McMurray), Jessica (Johnathan) Jayson, Allison (Alex) DeWald, Robert (Shelby) Williams, John Williams; great-grandchildren, Megan (Dave) Bonilla, Reed Nicolosi, Liam and Mia Dickinson, Keri and Aidan (Shaeleigh Kenealy) Daly, Adlyn Nicolosi, Madison Eleanor, and John Robert Jayson, Eleanor, Olivia, and Violet DeWald and Chase Brabant; great-great-grandchildren, Benjamin Bonilla and Jackson Daly along with several nieces and nephews, including Trevor Williams. She was predeceased by her husband, Robert A. Williams, Sr.; sons, Robert Williams, Jr. and Charles Williams; and grandson, DJ Whitney. In keeping with Eleanor’s wishes, there will be no public visitation or funeral services. Expressions of sympathy can be directed to Anita's Stevens-Swan Humane Society, 5664 Horatio Street, Utica NY 13502 or online at www.anitas-sshs.org Arrangements are under the direction of McGrath, Myslinski, Karboski & Nunn Funeral Directors, 470 French Rd., Utica.

Eleanor H. Williams, 98, passed away on Sunday, June 12, 2022, in the comfort of her home surrounded by her loving family. Born on February 28, 1924, Eleanor was the daughter of Arthur and Mildred (Farrell) Hahn. She was a graduate of Whitesboro... View Obituary & Service Information

The family of Eleanor H. Williams created this Life Tributes page to make it easy to share your memories.

Send flowers to the Williams family.