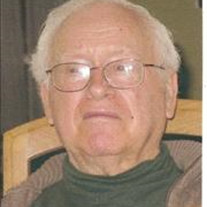 Edward Joseph Waclawski, age 86, passed away on January 10, 2010 in Ridgewood, New Jersey. He was born in Utica in 1923, the son of Joseph and Bridget Kida Waclawski. He graduated from Utica Free Academy, Cornell University, and attended Yale University. He married Ann Penc Kawa in 1955 for a loving family companionship until her death in 1998. Edward joined the National Guard at the age of 16, and was honorably discharged for minority in 1940. He was inducted in 1943, was selected for the Army Specialized Training Program, and honorably discharged in 1945. Mr. Waclawski worked as an inspector for the U.S. Department of Agriculture in Florida and Puerto Rico. He spent a decade as a research chemist at Revere Copper and Brass in Rome. His last occupation was as an Industrial Hygienist at Utica Mutual Insurance Company where he contributed to workplace safety by evaluating worker exposure to toxic chemicals and to other environmental factors. He contributed to Boy Scout Troop #27 as an assistant Scoutmaster. Ed was a collector. In fact, he never threw anything away. His collecting passion was for natural minerals. This led him to search for them in the Northeast and Canada. His specialty was "Herkimer Diamonds", some of which will be donated to the Smithsonian. Survivors are son Paul and wife Julie Ann of Brewster NY, daughter Elizabeth and husband Robert Glenning of Ridgewood NJ. He was "Dziadzi" to grandkids Tad, Ethan, Eric, Lily, and Kurt and a sister Celia Bulinski. He was predeceased by infant son Mark, a sister Emily and a brother Frank who was killed in service. Funeral services will be held on Thursday at 9am at the Kowalczyk Funeral Home, 1156 Lincoln Avenue, Utica and at 9:30am at Holy Trinity Church where a Mass of Christian Burial will be celebrated. Relatives and friends may call today form 4 until 7 p.m. Burial with Military honors will take place in Holy Trinity Cemetery. In lieu of flowers, remembrances may be made to the American Diabetes Association. 110 Lomond Court, Utica,, NY 13502. Envelopes will be available at the funeral home. The Waclawski family extends their gratitude to Peggy Woods, RN, and the staff of Van Dyke Manor for the care and compassion shown to Edward. Light a Candle at: www.kowalczykfuneralhomes.com

Edward Joseph Waclawski, age 86, passed away on January 10, 2010 in Ridgewood, New Jersey. He was born in Utica in 1923, the son of Joseph and Bridget Kida Waclawski. He graduated from Utica Free Academy, Cornell University, and attended Yale... View Obituary & Service Information

The family of Edward J. Waclawski created this Life Tributes page to make it easy to share your memories.

Send flowers to the Waclawski family.