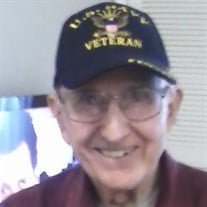 Edward J. Kopek passed away peacefully on Thursday, March 3, 2022, in his residence at Chandler Place Apartments in Rock Hill, SC. Ed was born February 22, 1924, in Utica New York, the son of Stanley and Michalina Zwarycz Kopek. Ed was an excellent athlete at Proctor High School. He played many positions on the baseball team and was an outstanding pitcher. Ed also played on the first soccer team Proctor ever fielded. Ed joined the United States Navy in 1943 and served most of his time in the Pacific Theater on the fleet oiler Chickaskia. The Chickaskia provided support during operations in the Philippines, and the invasions of Iwo Jima and Okinawa. He received the Good Conduct Medal and was honorably discharged in 1946. Ed always loved his country and was very proud of his service in the Navy. On August 30, 1947, Ed married Gladys Zebiak at Holy Trinity Church in Utica. They shared a happy and devoted relationship until her passing in April 2005. After the war, Ed was employed by New York Telephone Co, and later Verizon where he retired in 1986. Ed was a big family man and enjoyed the big get-togethers. Ed loved all his nieces and nephews and enjoyed joking and playing with them. Later in life, one of his greatest pleasures was getting cards, letters, phone calls, and gifts sent to him by those same nieces and nephews he watched grow up. The Admiral gives one final salute to The General. Ed also loved playing cards. You couldn't find a pitch game at a family party where Ed wasn't doing everything he could to win. He was playing pitch with his son, daughter, and son-in-law only a few hours before his passing. Ed is survived by his daughter, Elaine and husband, Wayne Yerdon of Lexington NC, his son, Kevin and wife Renee of Rock Hill SC; four grandchildren, Laura (Chris) Sarif, Bradley (Aislinn) Kopek, Tina Yerdon, and Lisa (Franklin) McKenzie, and six great-grandchildren, Madison and Morgan Hoban, Karina and Liani Kopek, and Henry and Margot McKenzie. Ed was predeceased by seven brothers and sisters, Walter (Stella) Kopek, Marion (Frank) Chrabas, Rose (John) Sergott, Josephine (Stanley) Zebiak, John "Neil" (Irene) Kopek, and infants Stephanie and Joseph. There will be no calling hours and burial will be at the family's convenience.

Edward J. Kopek passed away peacefully on Thursday, March 3, 2022, in his residence at Chandler Place Apartments in Rock Hill, SC. Ed was born February 22, 1924, in Utica New York, the son of Stanley and Michalina Zwarycz Kopek. Ed was an... View Obituary & Service Information

The family of Edward J. Kopek created this Life Tributes page to make it easy to share your memories.

Send flowers to the Kopek family.