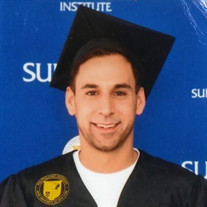 UTICA – Edward John Tarnowski passed away on Saturday, February 19, 2022, with his loving family at his side. Edward was known as “Eddie” and was just 36 years old. He will be forever missed by all. Eddie was born to Rosemary and Edward Tarnowski on July 7, 1985, in Utica. Eddie accomplished and did so much in his shortened life of only 36 years. Eddie told his mother Rosemary every day “I love you, Mom.” He had just accomplished one of his many goals of getting his Bachelor’s Degree in Business Management from SUNY Polytechnic Institute. Eddie was multi-talented and could do almost anything he took on. He enjoyed carpentry and inherited his remarkable skills amazingly from his father. Eddie was a kind soul and made friends quickly wherever he went. Eddie’s business, a construction company, Progressive House Development, brought him happiness to see the finished homes. His talent for organizing a home and ability to stage a room or house was an amazing God-given gift. Eddie loved to create dance music. He made friends while traveling the world as he visited fellow music lovers in places like Miami, South Beach, California, the Bahamas, and Spain. Eddie had a special bond with his only brother, Mike Talerico, who meant the world to him. He cherished time spent with him. He will be forever missed by his Mom and his stepdad Joe J.C. Pantola who so enjoyed Eddie’s daily visits. Eddie was the son J.C. never had and was as if he were his own son. His stepdad had some of the most enjoyable years of his life with Eddie as they did projects together. Eddie leaves behind his uncle and aunt, David and Donna Tarnowski of Indiana, aunt, Lucy Spina, Utica and a special cousin, Roman Tarnowski. His loyal German Shepard and constant companion “Tucker” was his everything and will be so missed by him. He also leaves many cousins and friends Eddie was predeceased by his father, Edward and grandmother, Aida Tarnowski. He so missed her and cherished the time as a young boy with his grandfather, Salvatore Spina. A final goodbye to his cherished lifelong friends he loved so much: Frank Leve, Maurizio Salamone and Bill Testa and cherished friend, Justin Zalatan. Remembrances in Eddie's name may be made to Anita's Stevens-Swan Humane Society (www.anitas-sshs.org). Funeral service will be on Friday at 1 p.m. at Kowalczyk Funeral Home, 470 French R., Utica. The family will receive guests following the service. Messages of sympathy at www.kowalczykfuneralhomes.com Visit tribute video at: https://www.tributeslides.com/tributes/show/W7DTSBCYMCYZY9WS

The family of Edward "Eddie" J. Tarnowski created this Life Tributes page to make it easy to share your memories.

Send flowers to the Tarnowski family.