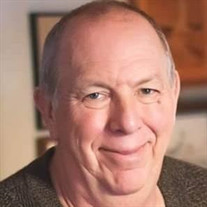 Edward W. Dlugolecki, age 62, passed away peacefully on February 19, 2022, surrounded by his loving family. Born on March 4, 1959, in Utica, Ed is the son of the late Joseph and Grace (Twitchell) Dlugolecki. He was a graduate of UFA and attended Herkimer County Community College. Ed joined the US Coast Guard in 1979 and served in various capacities until his retirement in 2009. His time in service included being the lightkeeper at Eastern Point Lighthouse in Gloucester, MA, Operation Desert Storm in 1990/91, and numerous other assignments that he was endlessly proud of. On June 2, 1979, Ed married Bonni DeCarr in Barneveld, NY, a blessed union of 42 years. They enjoyed traveling the Northeast in their camper with their beloved dog Cocoa and rarely passed up an opportunity to go on adventures together. Ed could often be found hiking, star gazing or relaxing by his camper with his wife. He was employed with Faxton-St. Luke’s Healthcare. Ed’s family would like to thank the Facilities Maintenance Department at St. Luke’s Hospital for taking such good care of them all during his time at the hospital. Surviving besides his beloved wife, Bonni, are three children, Chris (Kristine) Dlugolecki, CA, Joseph (Samantha) Dlugolecki, Oneida, and Wendy (Jon-Erik) DeLaCruz, Gansevoort; sister, Mary (Bruce) Coyne, Clayton; brother, Steve (Debbie) Dlugolecki, Sylvan Beach; cherished grandchildren, Madison, Phoebe, Hayden, Quinn, Zooey, Dea, Rex, Sarah, Ellie, and Norah; great-granddaughter, Rhiannon and many nieces and nephews. Ed was predeceased by his brother, Joseph Dlugolecki. Thank you to St. Luke’s ICU Doctors, Nurses, and Respiratory Therapy for the excellent care given to Ed, and the loving comfort they provided for Ed’s family. Relatives and friends are invited and may call Thursday, February 24th from 4-7 p.m. at McGrath, Myslinski, Karboski & Nunn Funeral Directors, 470 French Rd., Utica. Funeral services will be Friday at 11:30 a.m. at the funeral home. Interment will be in Forest Hill Cemetery. In lieu of flowers, remembrances in Ed’s name may be made to House of Paws Rescue (www.houseofpawsrescue.com). Envelopes will be available at the funeral home.

Edward W. Dlugolecki, age 62, passed away peacefully on February 19, 2022, surrounded by his loving family. Born on March 4, 1959, in Utica, Ed is the son of the late Joseph and Grace (Twitchell) Dlugolecki. He was a graduate of UFA and attended... View Obituary & Service Information

The family of Edward W. Dlugolecki created this Life Tributes page to make it easy to share your memories.

Send flowers to the Dlugolecki family.