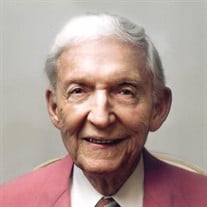 WHITESBORO - Edward Blask, 96, transitioned peacefully into the arms of the Lord on April 19, 2021, with his loving children and grandchildren by his side. Ed was born in Utica on November 8, 1924, the son of Joseph and Amelia (Milewski) Blaszczak. Ed was joined in marriage to Freida Ludwinski on June 2, 1946, and shared an extraordinarily inspired, devoted and loving union prior to her death on August 14, 2019. Ed spent his early childhood growing up on his parents’ small farm in Cold Brook, NY and attended a one-room schoolhouse for his elementary years. The family eventually established their home in Deerfield, NY and Ed continued his education, graduating from Utica Free Academy in 1942. Ed proudly served in the U.S Navy during WWII on an aircraft carrier from 1942-1945. After the war, he married the love of his life Freida Ludwinski and they raised their family over the course of 73 plus years of marriage that included 3 children, 6 grandchildren, and 6 great-grandchildren. Ed established himself as one of the best heavy-duty truck salesmen in the country working for International and then Dahl Motors in Utica to ultimately launch his own highly successful automobile/truck dealership, Ed Blask Ford Inc., in Barneveld NY in 1968, (moving to Yorkville in 1980) for more than 34 years. Ed also maintained a national presence in the industry serving for a number of years on the Ford National Dealer Council including a stint as Vice President. Ed also had a keen side interest in law and served as the Justice of the Peace for 13 years for the Town of Deerfield during the 1950s and 60s, holding court and performing marriage ceremonies in the family house on Bond Street. He was also an active member of the Lions Club of Deerfield. The focus of Ed's love and devotion was to his beautiful wife Freida, his children, grand and great-grandchildren. Ed was the most honest, fair, humble, hardworking, generous, caring, considerate, optimistic, and likable person one could ever hope to meet and better yet know as a friend; a fact confirmed over and over again by his numerous family, friends, customers, and other acquaintances. Ed's family will never tire of hearing how well people thought of him. His passion outside his family and work was playing golf; he absolutely loved the game and derived so much pleasure from it. He was quite a good golfer and he and Freida were members of several golf and country clubs in the area as well as in Florida where in later years they wintered. Ed loved music and was himself an excellent singer in the crooning style of Bing Crosby. Almost right up until his death he could break into a song, especially from the 30s and 40s, and remember the lyrics of many of the old standards. Ed (and Freida) were so incredibly supportive of the successful music careers of both their sons Dean and David and attended virtually every performance they played through the years. Ed was very proud of all his children’s and grandchildren’s accomplishments but mostly proud of the people they turned into. Ed was the consummate gentleman and a role model for all his family. He lived a full and large life with intention, verve, optimism, integrity, and a great (though corny!) sense of humor which was passed on to his children. He was truly an amazing and wonderful man, husband, father, grand and great grandfather, son, brother, and friend, who we were so very blessed to have with us for so many years. Ed's children will always remember him either swinging a golf club, dancing with their mom to their favorite song "New York New York" or singing one of a million songs he kept in his repertoire. "Ed loved our Lord Jesus, his wife Freida, children, grandchildren, and great-grandchildren, family and friends. He always thought he was the luckiest man alive. He felt that if he had to live his life over, he wouldn't change a thing except perhaps he would have liked a much lower golf handicap." Ed is survived by his sons, David Blask, New Orleans and companion, Diane (Maple Valley, Washington), Dean Blask and wife, Connie, Whitesboro, and daughter, Sharon Dreyer, Whitesboro; grandchildren, Guerin Blask and wife, Laura, Haworth, New Jersey, Craig Blask and wife, Megan, New Hartford, Fallon Hand and husband, Vincent, Utica, Charles, Alexander and Natalie Dreyer, Whitesboro; and great-grandchildren, Layla, Deacon, and Sadie, (children of Craig and Megan), Kora and Kendall, (children of Guerin and Laura) and Liam, (child of Fallon and Vincent). Ed was predeceased by a brother Joseph Blaszczak and sister Helen Davidson. Services will be at the convenience of the family. In lieu of flowers, please consider a donation in Ed’s memory to The Rescue Mission of Utica, 293 Genesee Street, Utica, NY 13501 or The Morrow Warming Center, 500 Plant Street, Utica, NY 13502. The Blask Family would like to extend our appreciation and thanks to the Visiting Nurses Association of Central New York for the wonderful care provided to Ed. Arrangements are under the direction of McGrath, Myslinski, Karboski & Nunn Funeral Directors, 470 French Rd., Utica. Messages of sympathy at www.mmknfd.com

WHITESBORO - Edward Blask, 96, transitioned peacefully into the arms of the Lord on April 19, 2021, with his loving children and grandchildren by his side. Ed was born in Utica on November 8, 1924, the son of Joseph and Amelia (Milewski) Blaszczak.... View Obituary & Service Information

The family of Edward Blask created this Life Tributes page to make it easy to share your memories.

Send flowers to the Blask family.