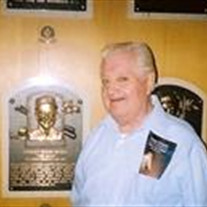 Edward Algustowski Utica Edward S. Algustowski, 83, a lifelong Utica resident died on Friday, April 23, 2010 at Faxton St. Luke's Healthcare. He was born in Utica on October 21, 1926 the son of Alexander and Stefania Mocziewska Algustowski and attended local schools. He was formerly married to Doris Sunderlin who died on July 14, 1989and Freda Walker who died on November 8, 2003. Ed was employed with the Horrocks Ibbotson Co. for 29 years and then retired from the Mele Manufacturing Co. He was a member of Holy Trinity Church. Ed will be remembered as a jokester who enjoyed his family and friends and his beloved St. Louis Cardinals. His survivors include his four sons and four daughters Judy Algustowski who was lovingly his primary caregiver and her fianc Daniel Hoehn Sr. Edward Algustowski, John and Kathy Algustowski, Peter Algustowski and Stephen Richards all of Utica; Elizabeth and Tim Griffith of NJ, Tina Algustowski of FL and Bonnie Algustowski Schmidt and Bryce Schmidt of FL and a sister Virginia Beerhalter of Utica. Also included are several grandchildren, especially Veronica and Tim Algustowski Jr. and their mother Maureen Algustowski of Clinton; Peter Shires of Utica and Michael Shires of NV and their mother Patty Shires of Utica and many nieces and nephews. His family would like to thank and acknowledge his niece Sandy and Bob Gorczynski of New York Mills, Jamie and Niall Lepper of NJ, Jeri Bielec of Utica and Bob Toper of Albany. He was pre-deceased by his son Timothy Sr., a brother Peter and sisters Stella Toper and Mary Furmanski. Funeral services will be held on Monday at 9am at the Kowalczyk Funeral Home 1156 Lincoln Avenue, Utica and at 9:30am at Holy Trinity Church where a Mass of Christian Burial will be celebrated. Relatives and friends may call on Sunday from 4 until 7pm. Burial will take place in Holy Trinity Cemetery. Ed's family would like to extend their sincere thanks to the nurses and staff of the C.C.U. of Faxton St. Luke's Healthcare for the wonderful care he received. Memorial contributions in his name may be made to the Holy Trinity Memorial Fund 1206 Lincoln Avenue, Utica, NY 13502. Light a Candle at: www.kowalczykfuneralhomes.com

The family of Edward S. Algustowski created this Life Tributes page to make it easy to share your memories.

Send flowers to the Algustowski family.