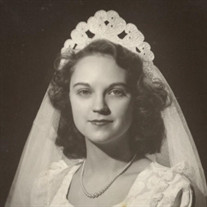 WHITESBORO- Edna Louise Bialas Synakowski Zarnoch, 91, passed away on December 30, 2020, at Oneida Health Hospital. Edna was born on November 28, 1929, the daughter of the late Frank and Bessie (Wojciechowski) Bialas of Utica. She attended Sacred Heart School, where she was a member of the parish and a 1947 graduate of Whitesboro High School. Edna was predeceased by her husband, Edward Synakowski, whom she married in 1948. They were blessed with six children. Edna was also predeceased by her second husband, William Zarnoch whom she married in 1972. They had one child. Edna loved being a mother and she was the best. She was invited to every event by everybody. She never missed a birthday, concert, ball game, or family celebration. To know her was to love her. She never ran out of candy for the games, love, kisses, or chocolate chip cookies. She was a great cook, a wonderful mother, grandmother, and great-grandmother. She was a remarkable sister, aunt, and friend. Her heart will live on in all who knew her - a great lady who will never be forgotten. It was an honor to know her and a privilege to be able to care for her the way she cared for all of us, until her final day. Edna is survived by her son and daughter-in-law, Mike and Patricia Synakowski, Holland Patent; son and daughter-in-law, Stephen and Regina Synakowski, Frankfort, granddaughter, Shawna (Brian) Fox, Remsen and great-grandson, baby Cooper J Fox; grandson, Christopher (Carlye) Synakowski, CT, and their unborn baby daughter; son and daughter-in-law, Don and Sue Synakowski, Whitesboro, grandson Matthew (Jennifer) Synakowski, New York City; and granddaughter, Alison (Aaron) Synakowski Davis, Saratoga and great-grandchildren, Julia, Ryan, and Austin Davis; daughter, Therese Synakowski of Cape Cod, Massachusetts; son and daughter-in-law, Martin and Beth Synakowski, VA, granddaughter, Jennifer Synakowski, and great-granddaughter, Alexa, Oriskany Falls, grandson Eddie Synakowski, VA and granddaughter Dawn Synakowski, VA; and daughter, Mary Zarnoch-Riley, Utica, grandson Ethan William Zarnoch-Riley; sister, Frances Duquette, and her family, Frankfort. Edna is also survived by three sisters-in-law and many nieces, nephews, and their families. She was predeceased by her oldest son, Eddie Synakowski, and siblings, Thomas J. Bialas, George Bialas, and Mary Usyk. Relatives and friends are invited and may call on Thursday from 3 to 7 p.m. at McGrath, Myslinski, Karboski & Nunn Funeral Directors, 470 French Road, Utica. In keeping with safety guidelines, only 25 people will be allowed in the funeral home at a time and face coverings are required. A Mass of Christian Burial will be celebrated on Friday at 10 a.m. at The Church of Our Lady of Lourdes, Utica. Interment will be in St. Joseph Cemetery, Utica. Our family wishes to extend heartfelt gratitude to the hospital staff at Oneida Health Hospital for the eight days that they cared for us. From the security guards to the housekeeping staff, nurses aides, and especially the doctors and nurses, Edna and her family received their utmost respect and the most outstanding care imaginable. In lieu of flowers, remembrances in Edna’s name may be made to St. Jude Children’s Research Hospital, the Whitesboro Fire Department, Whitesboro and Whitestown Police Departments, or Dunham Public Library. Envelopes will be available at the funeral home.

The family of Edna L. Bialas Synakowski Zarnoch created this Life Tributes page to make it easy to share your memories.