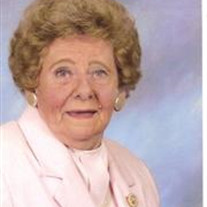 Dorothy Hinkle Utica Dorothy J. Hinkle, (Gram/Meme), 86, of Utica died peacefully on Friday, May 8, 2009 at her residence with her loving family at her side. She was born in Utica on June 22, 1922 the daughter of Peter and Margaret Michalak Knopka and attended local schools. She was formerly employed with Griffiss A.F.B. where she met Hayes J. Hinkle. On November 25, 1943 they were married in Holy Trinity Church. He died on June 28, 1988. She was a member of the Church of Our Lady of Lourdes, Utica and the former Women's Club and Altar Rosary Society of Our Lady of Lourdes. Dorothy was a loyal fan of the University of Notre Dame and a die hard supporter of the Fighting Irish. Her survivors include a daughter Karen Marie Geddes with whom she resided; three grandchildren and their spouses, Samuel Michael Jr. and Lisa Geddes of Whitesboro, Peter Hayes and Carrie Geddes of Pittsburg, PA and Debbie Geddes Threadgill of Utica. Also included are her 10 cherished great grandchildren, Eric Michael, Samantha, Alexis, Halie, Carolina, Christina, Courtney, Michael, Cody and Connor. She was pre-deceased by her son-in-law Samuel M. Geddes Sr. of February 18, 2008, a sister Helen M. Green, a brother-in-law Charles W. Green and an infant brother Thomas who died shortly after birth. She was also very close to her cousin Stella Noga who died in 2002. Funeral services will be held on Tuesday at 9am at the Kowalczyk Funeral Home 284 Main Street New York Mills and at 10am at the Church of Our Lady of Lourdes. Relatives and friends may call on Monday from 4 until 7pm. Burial will take place in Mt. Olivet Cemetery. The family of Dorothy would like to extend their sincere thanks to Rev. Joseph Salerno, Fr. Gregory Kreinheder of the Church of Our Lady of Lourdes, Fred Talerico M.D., Pat Rosati and their entire staff, and also the entire Hospice & Palliative Care staff, especially Navaz Dhabhar, Justin Dyer Sr., Mary Ellen Schapfer, Lisa Wolfe and Mary Juror for their love, kindness and compassion. Memorial contributions in her name may be made to Hospice & Palliative Care Inc. 4277 Middle Settlement Road, New Hartford, NY 13413 or to the Church of Our Lady of Lourdes, 2222 Genesee Street, Utica, NY 13502. Light a Candle at: wwwkowalczykfuneralhomes.com

Dorothy Hinkle Utica Dorothy J. Hinkle, (Gram/Meme), 86, of Utica died peacefully on Friday, May 8, 2009 at her residence with her loving family at her side. She was born in Utica on June 22, 1922 the daughter of Peter and Margaret Michalak... View Obituary & Service Information

The family of Dorothy J. Hinkle created this Life Tributes page to make it easy to share your memories.

Send flowers to the Hinkle family.