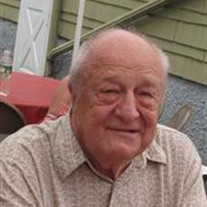 Type Obit Here Donald J. Springer New Hartford Donald Springer, 81, a lifelong area resident died unexpectedly on Friday, December 26 at home. He was born in Utica on May 1, 1927 the son of Harry and Ann Welpe Springer. He attended Utica Free Academy and Clarkson University. He received a Bachelor's of Science Degree from Tri - State University. On October 2, 1954 he was married to Jeannette Girard in Cornwall, Ontario; a loving union shared for over 53 years. Don currently owned and operated the D.J. Springer Inc. He was also co-owner of Getaway Travel He was a member of the Kiwanis of Utica, the Knights of Columbus, the Church of the Sacred Heart / St. Mary's in New York Mills and a member of the Yahnundasis Golf Club for over 58 years. Don was an avid golfer in earlier years and loved to fish. He also enjoyed traveling with his wife. He will be remembered as a loving and devoted husband, father, grandfather, great grandfather, brother, friend and everybody's "Poppy". His sense of humor and numerous one liners will be missed by all. His survivors include his beloved wife Jean; 4 daughters and their spouses, Lynn Springer of New Hartford, Nancy and Robert Annis of Plymouth, MA, Diane and David Canarelli of Lancaster, PA and Donna and Jeffrey Canarelli of Utica; 3 sons and their spouses, Wayne Springer and fiance Cathy Murphy of Utica, Gary and Lori Springer of New Hartford and Michael Springer and his companion Julie Stickles of Sherrill; 16 grandchildren, Eric and his wife, Sabine, Matthew, David and Kimberly Springer and their mother, Sherrie Springer, Sarah and Michael Annis, Jennifer, Michelle, Bryan and Kristen Springer, Philip, Megan, Christopher, Michael, Nicholas and Danielle Canarelli and five great grandchildren, Arianna, Hannah and Alyssa Sook and Kaitlyn and Lisa Springer; a sister Dorothy and her husband William Schmalz of Whitesboro and his sisters-in-law Vivian and Ronald French, Shirley and Gordon O'Connor, and Linda and Conway Wylie and brothers-in-law Melvin and Isabelle Girard, and Brian and Sandra Girard. Also included are several nieces and nephews and his faithful companion "big cat" Jessie. Relatives and friends are invited to attend a Mass of Christian Burial on Monday at 10am at the Church of the Sacred Heart / St. Mary's, New York Mills. Visiting hours will take place on Sunday (today) from 4 until 7pm at the Kowalczyk Funeral Home 284 Main Street, New York Mills. The Knights of Columbus will gather for services at 6:30pm Burial with Military honors will take place in Mt. Olivet Cemetery, Whitesboro. Don's family would like to express their sincere appreciation to the New Hartford Police and the Emergency Medical Technicians for the attention and effort on Friday morning; and also to Dr. Porus Dhabahr for his kindness and medical care over the years. Memorial contributions in his name may be made to the American Lung or the American Heart Association. Light a Candle at: www.kowalczykfuneralhomes.com

The family of Donald J. Springer created this Life Tributes page to make it easy to share your memories.

Send flowers to the Springer family.