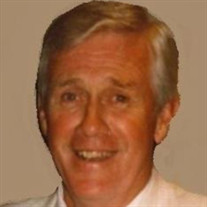 UTICA – Born in 1933, Donald Cooper Deck lived “a wonderful life” of 87 years. He passed away peacefully at home in the arms of his wife, Shirley, on October 12, 2021. He was the son of Frederick and Dorthea (Cooper) Deck. Don was a standout athlete at Rome Free Academy. He served in the US Coast Guard during the Korean Conflict. Upon his honorable discharge, he was employed by the Diocese of Syracuse at Calvary Cemetery in Utica until his retirement. During his tenure as Superintendent, he made many friends with local funeral directors and adopted their wry sense of humor and the nickname “Digger”. When Don was finished at Calvary his second career began as a funeral associate at Nunn & McGrath Funeral Directors. Don married Shirley Restuccio on October 5, 1957. What began as a blind date encompassed 64 years of love, dedication and the everyday small miracles of raising a family. Don was a man for all seasons. In the spring, he could be found coaching South Utica Little League. Summers found him on Raquette Lake, sailing or at the helm of the party barge. In the fall, he was on the golf course, even on Thanksgiving morning with his sons and son-in-law. In winter, he slalomed down Stratton Mountain, leaving his kids and grandkids in the dust. Winter nights he ran up and down basketball courts across the region as a basketball official, often with his late brother, Bill Deck. Don, also known as “The King” was dedicated to Shirley, raising his children, and enjoying his grandchildren. He will be remembered by the many young athletes he coached over the years, and everyone he met, as fair and patient. He was easygoing and loved nothing better than watching the Yankees, a round of golf, a day on the lake, and a cold beer. He was loved by a large family and friends who will miss him greatly. Don’s children especially appreciate their mother’s extraordinary care of their father, in sickness and in health, particularly over the last few months. Don is survived by his wife, Shirley, who took extra special care of him in his final months. Theirs was a marriage to be admired. He leaves his children and their spouses, Julie and Paul Montinieri, Don Deck, Jr., Deborah and Ron Evans, Michael and Kelly Deck, Fred and Kathleen Deck, Tom Deck and Deb Henley; his grandchildren, their spouses and Don’s great-grandchildren include Meredith and Joe Finch and their son, Teddy, Michelle Montinieri, Ron and Taylor Evans and their son, Warren, Kelsey and Patrick Gilman, Amy Evans, Olivia and Tyler Gardinier, Mikelle Deck, Cooper Deck, Caroline Deck and Hudson Deck. Don is survived by his sister, Pat DeLett as well as nieces and nephews. Relatives and friends are invited to attend a Mass of Christian Burial to be celebrated on Monday at 1:00 p.m. at Mary, Mother of Our Savior Parish, Lourdes campus, 2222 Genesee St., Utica. The family will receive guests immediately following Mass. Interment will be in Calvary Cemetery. In lieu of flowers, remembrances in Don’s name may be made to the Outreach Ministries of Mary, Mother of Our Savior Parish. Envelopes will be available at the Mass. The Deck’s would like to thank Dr. Fredrick Talarico and his staff for the wonderful care provided to Don over the years. Arrangements are under the direction of McGrath, Myslinski, Karboski & Nunn Funeral Directors, 470 French Rd., Utica. The leader of the band is tired And his eyes are growing old But his blood runs through my instruments And his song is in my soul My life has been a poor attempt to imitate the man I’m just a living legacy to the leader of the band His gentle means of sculpting souls took me years to understand Dan Fogelberg

The family of Donald C. Deck created this Life Tributes page to make it easy to share your memories.

Send flowers to the Deck family.