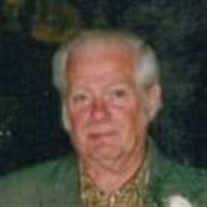 Clarence M. “Chuck” Canter, age 92, passed away in St. Elizabeth Medical Center on Friday, February 4, 2022. Clarence was born in Utica, on August 7, 1929, to the late Frank L. and Nellie Canter. He was educated in Utica schools and received his GED while in the US Navy. He was stationed in Adak, Alaska, until his discharge. He loved fishing and hunting when he was younger with his dad and brother-in-law, Bob Graf. Among his other loves were Doris Piechowicz, the love of his life, and her family who became his family. He and Doris loved going to church festivals and spending time with her family. Chuck as he was affectionately called, loved his New England Patriots and Tom Brady. He followed Tom’s career even when he signed with Tampa Bay. Chuck had a droll sense of humor and loved to tease. During his working years, he was employed at Drop Forge, drove trucks for a beer distributor, and was employed at the old Baker’s Greenhouse on Herkimer Road. Clarence is survived by Doris Piechowicz, Sue and Terry Simmons and their children, Becky and Kyle and their families. Clarence became an honorary grandpapa to Megan, Shawn and Amanda, Becky’s three children. During the pandemic, Clarence counted heavily on Becky to do his grocery shopping. He also leaves his sister, Catherine (Katie) Graf, Daytona Beach, Florida, whom he loved dearly; many nieces and nephews and his sisters-in-law, Diane Canter of Marcy and Holly Canter of Weare, New Hampshire. Clarence was especially close with Kyle who was like a son to him. They shared many good times together. Clarence was predeceased by his sister, Eleanor Peters and three brothers, Frank, Charles and Bill Canter. He will be especially missed by the Simmons and Price families who helped take care of him, by his loving sister and her family, and especially his niece, Theresa Wilson who cooked for him. There will be no calling hours and a Memorial Mass will be held in the summer.

The family of Clarence M. Canter created this Life Tributes page to make it easy to share your memories.

Send flowers to the Canter family.