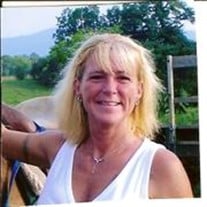 Christine A. Zammiello Utica Christine A. Zammiello, 47, a lifelong area resident passed from the arms of her husband into the arms of the Lord at her home on Saturday, January 17, 2009 after a long illness. She was born in New Hartford on July 23, 1961 the daughter of Fred and Hazel Trimm Lacelle and attended local schools. On August 22, 1980 she married to John Zammiello in Holy Trinity Church, Utica; a loving union shared for 29 years. Christine was employed by Wal-Mart at the Distribution Center for eleven years where she was in charge of ordering and filing. She was a member Holy Trinity Church. She will be remembered as a loving and devoted wife, mother and friend who had a great love of life. Christine was a charismatic leader who enjoyed dancing, singing and also fishing. But the most important part of her life was her commitment to family; they truly brought joy and comfort to her. Christy's survivors include her beloved husband John S. Zammiello of Utica; three daughters, Theresa and her husband, Dan Jalowiec of Rome, Joanna Zammiello of Utica and Elizabeth Zammiello also of Utica; a son John B. Zammiello of Utica; a brother Frank Figured of Massena, NY ; three sisters, Cathy and her husband Bill Henshaw of Syracuse, Patty and her husband Mike Lockwood of Whitesboro and Jackie Figured of Syracuse; her father Fred Lacelle of Utica, her father and mother-in-law, Bernard and Mary Zammiello of Utica; two brothers-in-law, Joseph Zammiello of Bigfoot, MT and Steven and Asha Zammiello of Utica and several nieces and nephews. She was predeceased by her mother Hazel; a brother, Fred Lacelle and a sister-in-law, Elizabeth Duda. Christy is also survived by her many co-workers and special friends at Wal - Mart D.C. 6038 who offered exceptional care and assistance throughout this difficult time. Funeral services will be held on Wednesday at 10am am at the Kowalczyk Funeral Home, 1156 Lincoln Avenue, Utica and at 10:30am at Holy Trinity Church where a Mass of Christian Burial will be celebrated. Relatives and friends may call on Tuesday from 4 until 7pm. Burial will take place in Holy Trinity Cemetery. The family of Christine would like to express sincere appreciation to the nurses and staff of the Oncology Unit at Faxton - St. Luke's Healthcare for the excellent care she received. Memorial contributions in her name may be made to the Children's Miracle Network c/o WKTV P.O. Box 2, Utica, NY 13503 Light a Candle at ww.kowalczykfuneralhomes.com

The family of Christine A. Zammiello created this Life Tributes page to make it easy to share your memories.

Send flowers to the Zammiello family.