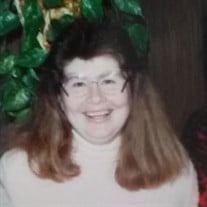 Carol Sue (Roback) Synakowski of Holland Patent, NY, passed away on March 1st, 2022 at home with her family by her side. She died from a serious lung disease called Pulmonary Fibrosis. Carol was born on August 18, 1960, a daughter of the late Edward and Helen (Stefanski) Roback. She was a graduate of UFA, Class of ‘78. On October 2nd, 1981 at St. Joseph and St. Patrick Church in Utica, Carol married Robert Synakowski, a union that lasted over 40 years. Together they raised two children, Joshua Jeffrey, and Melissa Sue. She was last employed by Hannaford in New Hartford and worked there for thirty years where she made many friends. Carol enjoyed her life to the fullest. Besides being a housewife, a mother, a grandma, and holding a job she had numerous hobbies, interests, and activities that also kept her busy. For instance, Carol hosted many holiday parties at their house which over time became known as “The Party Barn.” She also liked to travel and went on a variety of trips and even sailed away with her hubby on a number of vacation cruises. What fun Carol had trying her luck while visiting casinos wherever she went. But what she enjoyed the most was her lifetime full of camping trips with close family and friends which included many backyard campouts. On a quieter note, Carol enjoyed reading, crafting, flower gardening, bird watching, playing Scrabble, and working on puzzles. Carol was also one of those people who was always willing to help if ever she was needed. She was also known as the “glue” that kept their families together. How true that is. She will be forever missed. When Carol became ill her husband devoted his time to taking care of her full time. As for daughter Melissa, she stepped up to the plate and helped out any way she could, especially taking over the holiday cooking duties when mom couldn’t do it anymore. Carol’s ability to laugh throughout life enabled her to keep her spirit up during this difficult time. A special thanks to the family and friends who visited and showed support during this trying time. Besides her husband Robert, Carol leaves behind her beloved children, Melissa Synakowski of Marcy and Joshua Synakowski and daughter-in-law Kristen, and her cherished grandchildren, Reagan and Elias Synakowski all of Yorkville. Also surviving Carol are her sisters, Linda Roback and Kathy Roback, both of Utica, brothers and sisters-in-law, Richard and Cira of Texas and Glenn and Wendy of New York Mills. Aunt Carol also leaves a niece, Jennifer Roback and nephews, James Roback, Jaden Roback, Brian Roback and his wife Maggie and their children Julian and Ethan, and Brendan Roback and Benjamin Roback. Jaden Roback is also Carol’s Godson. Carol is also survived by her Synakowski in-laws, their wives, John and Ellen, James and Anita, Richard and Michelle, Stanley and Teresa, Michael and Tiffany and sister-in-law, Cindy Kaminski and her husband, Steve. She is also survived by a plethora of nieces and nephews on the Synakowski side along with numerous cousins. Carol also leaves a few Uncles and Aunts and many cousins and friends, especially Robin Chester of Tacoma who has been her long-time friend and almost like a sister to her. Besides her parents, Edward and Helen, she was predeceased by her mother and father-in-law, John and Theresa Synakowski and grandparents, Josephine (Topolski) and Michael Roback and Sophie (Kopera) Stefanski. Relatives and friends are invited and may call Sunday from 12:30 to 3:30 p.m. at McGrath, Myslinski, Karboski & Nunn Funeral Directors, 470 French Rd., Utica. Funeral services will follow visitation at 3:30 p.m. Live Stream Link: https://youtu.be/TklxhQQvMqQ

Carol Sue (Roback) Synakowski of Holland Patent, NY, passed away on March 1st, 2022 at home with her family by her side. She died from a serious lung disease called Pulmonary Fibrosis. Carol was born on August 18, 1960, a daughter of the late... View Obituary & Service Information

The family of Carol S. Synakowski created this Life Tributes page to make it easy to share your memories.

Send flowers to the Synakowski family.