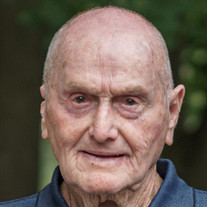 CLINTON - Carl G. Christ of Clinton passed away peacefully in his home surrounded by family on December 12, 2020. Carl was born November 10, 1924, to Ludwig and Jane Christ. Carl’s family delivered ice in Clinton during the 1920s and 30s before refrigeration. The Christ Family then got into the milk delivery business, under the name Christ Bros. He always told the story of delivering his first quart of milk when he was just seven years old; he stepped off the milk truck and fell his first day of work, but he didn’t break any milk bottles. Carl helped his family with the milk delivery business and dairy farm until he was drafted into the U.S. Navy in 1943. On his first night back from the Navy in 1946, Carl met the love of his life Anna (Siedsma) at a dance, and in 1948, the couple married. Their family quickly grew to seven children. He and Anna were able to watch their family grow even more when grandchildren came along. Christmas Eve and other holidays brought his always growing family together. Family was everything to Carl, and he was able to see his grandchildren grow up to have children of their own. In 1951, Carl’s agricultural career went from delivering milk to owning a farm of his own in Clinton. After retiring from dairy farming, Carl worked various jobs in the community he called home for decades, including truck driving for various local companies and working as a carpenter at Utica’s former General Electric facility and for other contractors. He continued to stay in agriculture over the years by maintaining the farmland around his house. He maintained that land right up until he was 95 years old. Carl was a family man and an amazing storyteller. He had a story ready for every occasion. And he knew the history of the area like no one else. He enjoyed more than anything dancing with his true love, Anna, and spending time with family. In Carl’s later years, he had nightly dinners with his children and grandchildren, keeping the family connected. Carl’s family will miss and cherish everything he brought to their lives. Carl will be sadly missed by his family members: his seven children Cynthia and William Callahan, Kurt “Buddy” Christ and Jane McNamara, Diane and Thomas McNamara, Carol and Mark Boehlert, Debbie and Kevin Franz, Sharon and Henry Lewis, and Matthew and Laurie Christ; his grandchildren Carrie (Tony), Billy (Dottie), Heather (Ray), Clayton, Erin, Michelle, Timmy (Anne), Jason (Courtnay), Tammy, Lisa (Barry), Adam (Melissa), Kristen, Ryan (Emily), Zach (Briana), Becky, Alyssa (TJ) and Kait (Andrew); and many great- and great-great-grandchildren. He is also survived by in-laws Minnie Neidhart; Jerry, Teddy and Sandy Siedsma; nieces and nephews; and special friends Becky, Todd and Dylan Kane. He was predeceased by his wife; parents; brother, Robert; grandson Keith and longtime companion Nancy Burns. Carl’s Celebration of Life will be held later privately with his family. In lieu of flowers, please consider a donation in Carl’s name to Hospice and Palliative Care 4277 Middle Settlement Rd., New Hartford, N.Y. 13413.

CLINTON - Carl G. Christ of Clinton passed away peacefully in his home surrounded by family on December 12, 2020. Carl was born November 10, 1924, to Ludwig and Jane Christ. Carl&#8217;s family delivered ice in Clinton during the 1920s and... View Obituary & Service Information

The family of Carl G. Christ created this Life Tributes page to make it easy to share your memories.

CLINTON - Carl G. Christ of Clinton passed away peacefully in...

Send flowers to the Christ family.