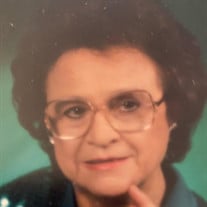 MARCY - Betty Allen Pawloski, 90, a resident of Marcy for 70 years, passed away on Thursday, January 21, 2021, at St. Luke’s Hospital. She was born in Rome on May 7, 1930, the daughter of Clarence and Caroline Allen. Betty married Stephen Pawloski in 1950 and together they raised five children. She was a fabulous cook and a master at making beautiful wedding cakes. She owned and operated Betty’s Diner on Route 49 in Marcy for many years before retiring in 1998. She is survived by her son, Stephen (Sandy); daughters, Jean (Robert), Judy (Allen) and Sally (Carl); her grandchildren, Christopher, Laurie (Bill), Kelly (Ralph) and Ami (Tim) and her great-granddaughter Jenna. Also, her brothers, Tom, Dick, George and Bobby; her sisters, Shirley and Carol and many nieces and nephews. She was predeceased by her husband, Stephen Pawloski, daughter Susan Pawloski, her parents, brother Clarence, Jr. and sisters, Tina and Pat. Visitation will be held at Kowalczyk Funeral Home, 470 French Road, Utica, on Friday, January 29, 2021, with family visitation at 9:00 a.m., friends and relatives from 10:00 a.m. to 11:00 a.m., and a Mass of Christian Burial at Holy Trinity Church at 12:00 Noon. Betty’s family would like to express their sincere appreciation to her sister, Shirley Jarvis and dear friend, Florence Candella, as well as the Monaghan and Crossway families. Memorial contributions in her name may be made to Holy Trinity Church Memorial Fund, 1206 Lincoln Avenue, Utica, NY 13502 or to Maynard Volunteer Fire Dept., Maynard Drive, Marcy, NY 13403.

The family of Betty Jane Pawloski created this Life Tributes page to make it easy to share your memories.

Send flowers to the Pawloski family.