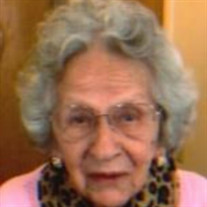 UTICA- Bertha “Betty” A. Malek, 105, passed away peacefully Saturday, May 23, 2020 at the Presbyterian Home. She was born on February 10, 1915, in Utica, to the late Joseph and Kunegunda (Zyla) Chruszcz. Betty married Edward Malek on June 27, 1931 in Holy Trinity Church, a blessed union of nearly 30 years prior to his passing in 1970. She was employed with Williams Laundromat. Betty is survived by her daughter, Geraldine Burlin, Marcy; grandchildren, Ronald (Kathy) Burlin, Syracuse, Thomas (Christine) Burlin, MD, James (Vicky Slone) Burlin, NC, Sherry (Darin) Kiddney, Frankfort; great-grandchildren, Craig, Lauren (Carlos), Michael (Holly), John, Katie (Xavier), Dana (James), Greg (Stephanie), Melissa, Jeffrey (Amy), Mark, and Dylon; great-great-grandchildren, Presley, Charlotte, Myles, Nico, Demi, Maxwell, Josiah and another on the way in November, as well as many nieces and nephews. She was predeceased by her son-in-law, Frederic Lee Burlin; brothers, Stanley, Joseph, Albert, Frank, Edward, Chester and James and sisters, Angeline and Virginia. Remembrances in Betty’s name may be made to the Holy Trinity Church Memorial Fund. Due to current health concerns and in keeping with the CDC and the National Funeral Directors Association directives, funeral services will be private for the family. Those wishing may express their condolences on this website.

The family of Bertha "Betty" A. Malek created this Life Tributes page to make it easy to share your memories.

Send flowers to the Malek family.