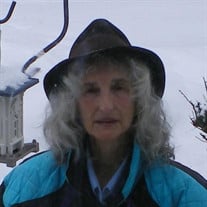 Barbara “Babs” Gregory, 85, passed away on Tuesday, March 29, 2022, at Crouse Irving Hospital, Syracuse. She is survived by her son, James Gregory, and her siblings, Rod Supiro, Bette Hammer, and Joan Supiro; as well as several dear nieces and nephews spanning two generations. She was predeceased by her son, Peter Gregory, who passed on May 3, 1992. Babs was born in Seal Harbor, a village on Mount Desert Island, off the coast of Maine. She was the daughter of the late Stuart and Phyllis (Davis) Supiro. She graduated from Utica Free Academy in 1955. Babs and John Gregory were married for 43 years, prior to his passing in 2000. Babs was first employed by Griffiss Air Force Base, and later in Massachusetts, as a clerical worker. Thereafter, the family returned to the Central NY area, eventually establishing roots with their two sons in Camden, NY. With characteristic zest, she nurtured her family in a communicative, sweet, available, and sincere fashion. It was clear by her actions, words, and letters to us all: her community of family in New York, Georgia, Massachusetts, Texas, and Maine, throughout all of our travels, that she unreservedly cared. Babs enriched community life by serving as secretary in the Camden Presbyterian Church. She demonstrated a devotion to this position; actively and compassionately touching and supporting the lives of so many over time. Her life of faith brought her to the Rome North Congregation of Jehovah's Witnesses, in her later years. Babs’ last employment was with Mystic Stamp Co. in Camden. Her birthplace and ocean roots beckoned throughout her life, and she saw herself as a kin of the ocean world. By extension, or perhaps because of her roots, she felt particularly touched by and connected to the natural world. Animal and bird names, sounds, and habits were within her realm; be they in the backyard or on the webcam checking out eagles during and after hatching or lions in their habitats. More recently at home, this interest and empathy extended to supporting, rescuing, and house training feral cats and kittens. Hers has been a life of excitement for the natural world, commitment to family, and directed energy for meeting the needs of each day, person, and living creature with whom she spent time. Plans are not in place for a public visitation or funeral. Remembrances in Barbara’s name may be made to the American Cancer Society or the Humane Society of Rome. Arrangements are under the direction of Surridge & Roberts Funeral Home, 470 French Rd., Utica.

Barbara &#8220;Babs&#8221; Gregory, 85, passed away on Tuesday, March 29, 2022, at Crouse Irving Hospital, Syracuse. She is survived by her son, James Gregory, and her siblings, Rod Supiro, Bette Hammer, and Joan Supiro; as well as several... View Obituary & Service Information

The family of Barbara "Babs" Gregory created this Life Tributes page to make it easy to share your memories.

Send flowers to the Gregory family.