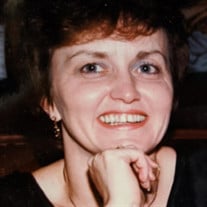 SANTA FE, NM/UTICA, NY – Barbara L. (Scampone) Simon, 78, after a courageous battle, passed away peacefully at home on April 25, 2021, with her loving family by her side. Barbara was born on July 24, 1942, in Olean, NY, the daughter of the late Ward M. and June V. (Rasey) Scott. She grew up in Eden, NY. She earned an Associate degree in Nursing from Mohawk Valley Community College and went on to earn her Bachelor of Science in Nursing from The University of New Mexico. She was employed as an RN at Christus St. Vincent Hospital in Santa Fe, for over 30 years. On October 21, 2013, she married her first love, Ronald Simon, in Las Vegas, NV. Barbara was full of life, a fun-loving and positive person. She loved a good joke and to brighten our day by sharing. Her contagious laugh, beaming smile, and loving hugs will be greatly missed. We are comforted in knowing that above all, she would want us to be happy. An animal lover, she leaves behind her beloved poodles, Axl and Rosie, who never left her side. She was a lifelong learner and had many interests: playing the piano, arts and crafts, “farming”, travel, and milkshakes. Her later years were spent beaming with pride for her grandchildren, watching one take to the skies as a pilot in the Air Force, having an articulate and joyful conversation with her entrepreneur granddaughter, the work of another with the youth in her community, or excitedly watching her youngest grandson fulfill his dreams on the football field. She was a gift to her family and will be cherished forever. Barbara is survived by her husband, Ronald; her children from her first marriage, Babette (Mitch) Komnick, Albert (Petra Irvine) Schaefer, Cathie (Harvey) Hanna, Trina Moore and June Scott; grandchildren, Nick, Amber, Tanya, Lauren, Rob, Cheryl, Kaleigh, Timmy, Davey, Lilly and several great-grandchildren. She is also survived by her sister, Sandy Staub and brother, Butch Clementi. She was predeceased by her daughter, Cheryl Withers; son, Michael Schaefer; her second husband, Sam Scampone; grandson, Christopher Moore and her brother, William “Tutti” Scott. In keeping with Barbara’s wishes, a celebration of life will be held at a later date. Arrangements are under the direction of McGrath, Myslinski, Karboski & Nunn Funeral Directors, 470 French Rd., Utica.

The family of Babrara L. (Scampone) Simon created this Life Tributes page to make it easy to share your memories.

Send flowers to the Simon family.