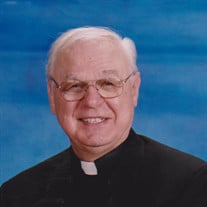 UTICA – Reverend Arthur R. Hapanowicz, who ministered as a Roman Catholic Priest for 64 years, passed from this life into eternal life on the Lord’s Day, Sunday, March 7, 2021, at MVHS Rehabilitation and Nursing Center to God whom he served. Father Art was 91 years of age, born on April 27, 1929, the seventh of eleven children in the family of Walter and Anna (Pomichowska) Hapanowicz, Sr. He was born and raised in Utica, attended Kernan School and Utica Free Academy where he graduated in 1947 and served as Senior Class President. Father Art began his Priestly studies at St. Mary’s College in Orchard Lake, Michigan and continued Philosophy and Theology studies at SS. Cyril & Methodius Seminary, also in Orchard Lake. He was ordained a Priest on May 19, 1956, by the Most Rev. Walter E. Foery for Priestly service in the Diocese of Syracuse. Father Art fulfilled his Priestly ministry as associate priest at St. Mary’s Parish in New York Mills; Transfiguration Church in Syracuse; Transfiguration Church in Rome and Our Lady of Lourdes Parish in Utica. His first pastorate began in 1971 at St. Patrick’s Parish in Taberg and the Mission Church of St. Anne in Glenmore. In 1975, he assumed the pastorate of St. Stephen’s Church in Oswego; in 1980 as pastor of Transfiguration Parish in Syracuse; in 1992 he became Pastor of his childhood Parish of the Most Holy Trinity in Utica. In 2009, at age 80, Father Art retired to reside at St. John the Evangelist Church in New Hartford and continued his Priestly ministry in retirement. Father Art is survived by his sister, Marion Malone, Naples, FL; brother, Stanley Hapanowicz, New Hartford and many nieces, nephews and their children. He was predeceased by his two-year-old infant sister, Irene; sister, Jean Betz and brothers, Raymond, Bruce, Sr., Walter, Jr., Thaddeus, Richard and Edwin. Visitation will be Thursday, from 4-6 p.m. at Holy Trinity Church, 1206 Lincoln Ave., Utica, NY for parishioners and friends and will be followed at 6 p.m. with a Vigil Prayer Service for a Priest with his fellow priests. Relatives and friends are invited on Friday morning to join with Father Art’s fellow priests at 11 a.m. at Holy Trinity Church, where Bishop Douglas J. Lucia will celebrate a Mass of Christian Burial for a fellow Priest. Burial will follow in the Priests Circle at Holy Trinity Cemetery, the cemetery Father Art cared for during his years at Holy Trinity Church. Father Art asks you pray for him. Father Art’s family wishes to thank the nurses and staff of the MVHS Rehabilitation and Nursing Center especially those on Barton North for the care, compassion, and professionalism shown during his stay. In lieu of flowers, remembrances in Father Art’s name may be made to the Holy Trinity Memorial Fund or to St. John the Evangelist Church, New Hartford. Envelopes will be available at calling hours and the Mass. Funeral arrangements are under the direction of Kowalczyk Funeral Home, Utica. Messages of sympathy at www.kowalczykfuneralhomes.com

UTICA &#8211; Reverend Arthur R. Hapanowicz, who ministered as a Roman Catholic Priest for 64 years, passed from this life into eternal life on the Lord&#8217;s Day, Sunday, March 7, 2021, at MVHS Rehabilitation and Nursing Center to God whom... View Obituary & Service Information

The family of Rev. Arthur R. Hapanowicz created this Life Tributes page to make it easy to share your memories.

UTICA – Reverend Arthur R. Hapanowicz, who ministered as a Roman...

Send flowers to the Hapanowicz family.