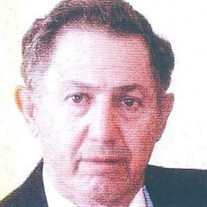 Anthony C. (Tony) DeNadai age 89, passed away on February 9, 2022. Tony was born in Pen Argyl, PA, the son of John and Anna DeNadai. He was a graduate of Pen Argyl High School where he participated in sports, lettering in football and baseball. On August 1, 1953, he married Lorraine Viglione of Bangor, PA at Our Lady of Mount Carmel Catholic Church in Roseto, PA. They shared a loving union for 68 years. After completing high school, Tony was employed at Fedon Electric Company in Pen Argyl. In 1952, during the Korean Conflict, he was drafted into the US Army. After completion of basic training, he was sent to Fort Devens, MA to attend Radio Interceptor School. He was then assigned to the US Army Security Agency and served three years, at which time he reached the rank of Sergeant. He spent two of the three years serving in the Philippines. Upon discharge from the service, he attended RCA Institute in NYC. After graduation, Tony was employed by the General Electric Company for 35 years. During this time he attended Syracuse University at Utica College and graduated in 1972 with a BS degree in Physics. He retired from GE in 1991 as a Senior Engineer/Group Leader. Tony was a member of Our Lady of the Rosary Church in New Hartford, the GE Elfun Society, the GE Quarter Century Club, and the Valley View Golf Club. He was an avid golfer who could be found walking Valley View early mornings with friends. Tony was an amateur radio operator (call letters W3TJT) since the age of 18. He also enjoyed managing Little League and Babe Ruth baseball for eight years. Other hobbies included woodworking, camping, digital photography, and computers. Tony is survived by his wife, Lorraine; a daughter and son-in-law, Susan and Robert Sanderl, Oneida, NY; son, David DeNadai, Liverpool NY; three grandchildren, Jennifer Pinkel, Bill Pinkel, and Lauren and Jeff Dennis; and two great-grandsons, Jason and Luke Dennis; sister, Wanda Caponigro, Scranton, and her family; brother, John DeNadai, San Francisco; sister-in-law, Katherine Spagnola, Bethlehem, PA, and her sons, Lawrence and John Spagnola, and several nieces, nephews and cousins. He was predeceased by brothers-in-law, Sam Spagnola and Jerry Caponigro. Tony’s family will gather for a Memorial Mass at Mary, Mother of Our Savior Parish, Our Lady of the Rosary campus, to celebrate his life at a private time. Entombment will take place at Calvary Mausoleum. Arrangements are under the direction of McGrath, Myslinski, Karboski & Nunn Funeral Directors, 470 French Road, Utica.

Anthony C. (Tony) DeNadai age 89, passed away on February 9, 2022. Tony was born in Pen Argyl, PA, the son of John and Anna DeNadai. He was a graduate of Pen Argyl High School where he participated in sports, lettering in football and baseball.... View Obituary & Service Information

The family of Anthony C. (Tony) DeNadai created this Life Tributes page to make it easy to share your memories.

Send flowers to the DeNadai family.