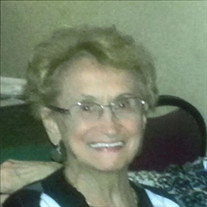 UTICA – Ann Kida Wolak died January 10, 2021, in the arms of her daughter, Patricia in the home they shared. Ann was born in Clinton to Thomas and Frances Kida who had emigrated from Poland, Europe. Her father died young and as one of six children during the Depression, Ann had many house responsibilities and helped raise her youngest sister, Genevieve with whom she had such a close bond. She graduated from UFA as a top student despite this. She saved money to go on to school to become a lab technician but her mother had a stroke and she had to care for her instead. On August 24, 1940, Ann married Thaddeus Wolak at St. Stanislaus Church. One of Ted’s famous sayings to Ann was, “You look like a million dollars” and he meant it. He died on December 9, 1968, after sharing a blessed union of 28 years with Ann. Ann went to work at General Electric in 1950 starting on “the line” where she was quickly promoted. She worked in the lab and GE sent her to MVCC to learn advanced math and Japanese. They wanted to send her to Syracuse University for an engineering degree but she declined because of family responsibilities. She never received less than an excellent evaluation. The job she held then now requires an engineering degree. We used to call my mother a “perfectionist”. Everything was perfect, be it a wrapped package too beautiful to open, a hand-knitted sweater, sewn jacket, or hem. She could solve problems with a wrench or do math in her head. Her checkbook was never off a cent. She could always soothe a crying baby and put him to sleep. Her dogs would follow her without a leash. She could touch them in a certain way and they were in nirvana. She was warm and loving and generous and an excellent dancer. She did calligraphy for weddings. A wonderful cook, she was known for her chicken soup and apple pie – no recipe, of course. She organized fashion shows for the PTA and was meticulous about her appearance. She had an enviable figure all her life. She was a marathon shopper and the words “TJ Max” always brought a smile to her face. If they had an Olympic sport for shopping she would have won the Gold. Ann also loved her jewelry and spent many of her afternoons at Benny’s enjoying great conversation and always looking to strike a “good deal”. In retirement, a regular at the Sons of Italy, she enjoyed Bingo (and won), card games, and traveling with her daughter, her best friend. Ann was a member of Skiba Post Auxiliary and very proud of her Polish Heritage. She was a pani, a gentle, quiet and warm-hearted lady. Ann was a devout Catholic, who could be found at 5 pm Mass in her travel chair and believed in equality for all. Until recently, Ann could be found living her life to the fullest. From getting spa manicures and pedicures at VIP Nails with her daughter, to going out to dinners and getting her hair done, nothing stopped Ann from enjoying it all with her daughter, in her travel chair. Surviving are her loving daughter, Patricia Ann; special nieces, Laurie “her other daughter” (James) Israels, Annie, who was named after Ann, (Thomas) Lavere, Jeannette Chambrone, Fran Aiello, Anne Wolak and Johanne Wolak, who all played an important role in Ann’s life, from sending cards, to cooking her favorite meals to bring comfort or bringing food, to doing the tasks no one else could, it meant so much to Ann, she was truly blessed to have them. She is also survived by several other nieces, nephews, great-nieces and great-nephews who were so special to her. She was predeceased by siblings, Joseph, Jacob, Caroline, Edward and Genevieve; special nephews, Thomas Kida and Jacob Kida; niece, Geraldine Higgins; longtime friend Wanda Handzel, who was with her since the times they roomed together at St. Elizabeth’s during the War and her canine companions Jake and Sam. Relatives and friends are invited and may call Thursday from 4-7 p.m. or until all friends and family are seen at McGrath, Myslinski, Karboski & Nunn Funeral Directors, 470 French Rd., Utica. In keeping with safety guidelines, only 25 people will be allowed in the funeral home at a time and face coverings are required. Funeral services will be Friday at 1 p.m. at the Church of Our Lady of Lourdes, where a Mass of Christian Burial will be celebrated. Interment will be in Holy Trinity Cemetery, Yorkville. In lieu of flowers, remembrances in Ann’s name may be made to the Dementia Society of America, which affected her life greatly, or to St. Jude Children’s Research Hospital. Envelopes will available at the funeral home or online at https://www.dementiasociety.org/donate or https://www.stjude.org/donate Ann’s family would like to thank Dr. Amy Gorczynski for her knowledge and care as well as the nurses and staff at Hospice & Palliative Care Inc. for making Ann’s last days so comfortable. Her family would also like to thank Jane and Frank Blando, for being such great friends throughout the years and all the times they helped Ann in her daily life. A special thanks also goes to Jeff Messa, who kept her beautiful and laughing. Messages of sympathy at www.mmknfd.com

UTICA &#8211; Ann Kida Wolak died January 10, 2021, in the arms of her daughter, Patricia in the home they shared. Ann was born in Clinton to Thomas and Frances Kida who had emigrated from Poland, Europe. Her father died young and as one of... View Obituary & Service Information

The family of Ann Kida Wolak created this Life Tributes page to make it easy to share your memories.

Send flowers to the Wolak family.