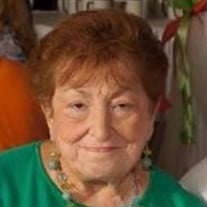 UTICA - Ann Christine (Julian) Mustard received her wings on January 23, 2021, after a long illness. She was born in Utica, NY on October 24, 1935, to Frank and Samia (Smiles) Julian. She graduated from UFA in 1953 and worked at the NY Telephone Company in Utica. She married Richard A. Mustard on October 3, 1963. They shared 17 years of marriage until his death in 1979. They were blessed with two sons, Michael and Mark. While married, she lived and worked in Syracuse at the Herald-American. After her husband’s death, she returned to Utica where she worked at Marine Midland Bank and cared for her parents and sons. She spent the last 20 years living with Michael and Teri Jo and the person who became her sister by choice and best friend, Dolores (“Dee”) VanDresar. She is survived by her son Michael (and Teri Jo) and her daughter-in-law, Danielle. Her family by choice: lifelong friend Helen Black; Dee’s children; Wayne and Stephen Hesler-Mondore. She is also survived by her sister-in-law, Shirley Julian, and many nieces and nephews. She was predeceased by her husband, her son Mark, her brother Guy, and “Dee”, and her fur-baby Kirby. Michael and Teri Jo wish to express their deepest appreciation to Dr. Kannan and staff as well as Sitrin Home/Aspen House staff who cared for her the last year of her life. She was cherished and loved by all who knew her. Home and family were the core of her being and at the end of her life, she was overwhelmed by the graciousness shown to her by her family and friends. Due to COVID restrictions, a celebration of her life will be scheduled at a future date. Inurnment will be in St. Joseph Cemetery. In lieu of flowers, please consider donations to the American Cancer Society or the American Heart Association in her name. Arrangements are under the direction of McGrath, Myslinski, Karboski & Nunn Funeral Directors, 470 French Rd., Utica.

UTICA - Ann Christine (Julian) Mustard received her wings on January 23, 2021, after a long illness. She was born in Utica, NY on October 24, 1935, to Frank and Samia (Smiles) Julian. She graduated from UFA in 1953 and worked at the NY Telephone... View Obituary & Service Information

The family of Ann J. Mustard created this Life Tributes page to make it easy to share your memories.

Send flowers to the Mustard family.