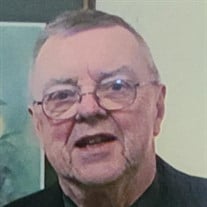 Alvin Hollmer, a beloved husband, father, grandfather, brother and U.S. Navy veteran, died on Dec. 12, 2021 after a short illness. The long-time New Hartford resident is survived by Betty Hollmer, his wife of more than 56 years, his sons Mark, Chris and Peter; their respective spouses Michael Lee, Christine Hollmer and Maura Hollmer; grandchildren Nick and Lauren Hollmer, Patricia and Helena Hollmer, and Max Hollmer Chernetsky; his younger sister Anita Hodson, niece Elke Hodson Marten, her husband Alex Marten, their children Juniper Marten and Matilda Marten, and nephew Tim Hodson. A daughter, Gretchen Hollmer, died in 2013. Mr. Hollmer was born on March 20, 1938 in Brooklyn, N.Y., to Henry and Agneta (Schluter) Hollmer, immigrants from the Schleswig-Holstein region of northern Germany. He grew up in Schuylerville, N.Y. with his sister on a dairy farm owned by their parents. He helped his father in the field at a young age, working on tasks such as breaking up the soil and cultivating between planting rows. He also sometimes drove a truck as early as age 8, to assist in picking up bales of hay, with his father jumping in as needed to help him make turns. Mr. Hollmer graduated from Stillwater Central School in 1955 as valedictorian. Always a smart student, he was class treasurer during sophomore year and in the French club, among other activities. He graduated from Rensselaer Polytechnic Institute four years later with a Bachelor’s degree in chemical engineering. At RPI, he was part of the school’s U.S. Navy Reserve Officers’ Training Program, and graduated with a commission as Lieutenant Junior Grade in the U.S. Navy. (He earned a Master’s degree in hydraulic engineering at the State University of New York at Buffalo more than a decade later.) Mr. Hollmer served his active-duty commission from 1959 to 1961, on the USS Beale, a Fletcher-class destroyer. The ship missions he was a part of included monitoring the “splash down corridor” for one of the Apollo space flights. He and his ship were also involved in the Bay of Pigs operation under President John F. Kennedy. He remained in the U.S. Navy reserves for 23 years before retiring as a full commander. Mr. Hollmer married the former Betty Till on June 26, 1965 in Buffalo, New York. They were introduced through mutual friends. He converted to Catholicism when he married, and was active in his church. He worked for several years for DuPont in Buffalo, and after that, for the New York State Department of Environmental Conservation. His master’s degree thesis focused on the ice flow in the Niagara River, and helped him secure a job at the New York State Power Authority in Niagara Falls, N.Y. while he and his family lived in Eden, N.Y. He continued to work for the NYS Power Authority through a move to New Hartford, N.Y. in 1980, until his retirement at age 59. In his retirement, Mr. Hollmer became an avid bridge player and an active cruciverbalist – a person skillful at solving or creating crossword puzzles. He was a regular member of a crossword puzzle blog site and developed many friendships there, and was particularly proud of two crossword puzzles he co-created with a close friend that were published by the L.A. Times. He was also active for many years in a curling club in Utica. Visiting hours for Mr. Hollmer will be on Tuesday, Dec. 21, 2021 at St. John the Evangelist Catholic Church, 66 Oxford Rd. in New Hartford, from 10 a.m. to 11 a.m. A funeral Mass will immediately follow, starting at 11 a.m. Mr. Hollmer will be laid to rest at the Gerald B.H. Solomon Saratoga National Cemetery on 200 Duell Rd. in Schuylerville, next to the farm where he grew up. In lieu of flowers, remembrances in Alvin’s name may be made to St. John the Evangelist Church, New Hartford. Envelopes will be available at the Mass. Arrangements under the direction of McGrath, Myslinski, Karboski & Nunn Funeral Directors, 470 French Rd., Utica. Messages of sympathy at www.mmknfd.com.

The family of Alvin Hollmer created this Life Tributes page to make it easy to share your memories.

Send flowers to the Hollmer family.