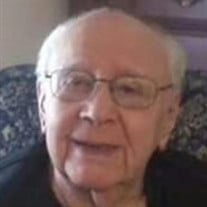 NEW HARTFORD – Albert J. Majka, age 104, passed away on Friday, November 13, 2020, at Faxton-St. Luke’s Healthcare with his family by his side. Al was born on November 27, 1915, in Leipzig, Germany, the son of the late Joseph and Victoria (Walczak) Majka. He came to the US at the age of 8. Al was a US Army veteran serving during WWII. In 1938, Al married Genevieve M. Handzel who preceded him in death in 1985. He later married Eleanor Berthold in 1987. She passed away in 2010. Al was a machinist for Utica Cutlery for 47 years. He also worked at Cornish’s Dairy Store part-time for many years. Al is survived by his granddaughters, Lisa (Ken) Randall and Robin Duffy (Tim Bargfrede), five great-grandchildren, and 6 great-great-grandchildren. He is also survived by Eleanor’s daughters, Carol Orlowski and Linda (Ed) Przylucki and their families and many nieces and nephews. Al was predeceased by his son, Richard Majka; grandson, Steven Majka and his sister, Mary Goracy. Relatives and friends are invited to a Mass of Christian Burial to be celebrated on Wednesday at 10 a.m. at St. Thomas Catholic Church, New Hartford. Entombment will be in Resurrection Chapel Mausoleum. Al’s family extends a special thank you to his former daughter-in-law, Bonnie Majka who he loved like a daughter, nephew, John “Sonny” Palaimo and Patrick Duffy for always being there for him. Also a special note of gratitude to the Lutheran Home Independent Living for all the care and kindness shown to Al during his years there. In lieu of flowers, remembrances in Al’s name may be made to the Lutheran Home, 110 Utica Rd., Clinton. Arrangements are under the direction of Kowalczyk Funeral Home, 284 Main Street, New York Mills.

The family of Albert J. Majka created this Life Tributes page to make it easy to share your memories.

Send flowers to the Majka family.